By Tierney Smith
RTCC in Rio

Following just two days of what can hardly be called negotiations – an endless stream of nations pre-prepared and uninterrupted statements – the negotiators and heads of state at the Rio+20 conference prepare to ratify the conference outcome.

Finalised on Tuesday and despite late pleas from the major groups, Date of History winner 17-year-old Brittany Trilford and UN Secretary General Ban Ki-moon, the draft outcome was hardly debated at all during the high-level segment of the conference.

With groups accusing the delegates, who arrived at the conference on Wednesday, of agreeing to a weak text, their frustration spilled-over yesterday into a sit-in protest followed by a walkout by many civil society and youth groups.

Speaking at the conference Sharon Burrows from the International Trade Union Confederation (ITUC) called for Civil Society to be given a voice at the table in these types of negotiations.

“Frankly the leaders didn’t even show the courage of even negotiating with each other,” she told reporters. “They accepted a low ambition text from the bureaucrats, from the diplomats and they did nothing to lift the aspiration.”

While the text shows a strong understanding of what must be done, recognises the importance of sustainable development, and re-affirms the pledges made 20 years ago at the first Earth Summit, Kumi Naidoo Executive Director of Greenpeace says it offers little in terms of concrete pledges.

“Our main issue is that there are no bench marks, no deadlines, no money on the table to make these things happen and we would be really stupid as a civil society, or as anybody really, if we just accept that they are now going to act in a way that the world requires.”

With financial crises hitting the world and many politicians looking inwards to their own countries rather than out towards the globe, and with discussions covering topics from poverty eradication to planetary limits and new economic systems to replace GDP, the discussions were never going to be simple.

For Meenakshi Raman, from Third World Network, the conference represented the state of the situation globally.

“The lack of ambition in the text that you see, really represents the state of global politics today and I think as the President of Brazil was saying giving the economic and the financial crisis internationally, countries particularly in the North are having domestic issues and are focusing domestic and are less willing to talk about international cooperation and international solidarity,” she told RTCC.

And while negotiations may have fallen far short of what many civil society groups, and many countries may have hoped for, it is not the end of the process and could be seen as a positive beginning.

“What you see in the outcome document is the reaffirmation of Rio principles including CBDR, you see in finance and technology what we actually got were mechanisms that we could get in the future,” added Raman. “There are positives but from where the developing countries began, to what they got, you can look at it as a glass half full.”

And while the final three days of negotiations have run fairly smoothly, the fraught process which has been going on behind the scenes for over a year now brought moments where it looked as if there would be no agreement at all. 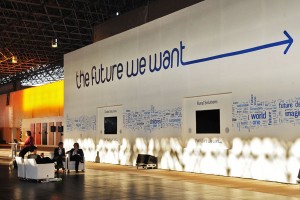 Erica Carroll, Policy Analyst from Christian Aid told RTCC: “Thanks to the leadership of the Brazilian government, the text went from being highly contentious with the possibility of no agreement, to a finely balanced compromise that all countries could sign on to, even if they were not happy with every aspect of it.

“We have a commitment to pursue a process to formulate sustainable development goals. If government and civil society, along with allies in the private sector take action on these commitments then we will be making some positive, measurable and accountable steps to a sustainable future.”

However, she too warned that civil society – especially those poorest and marginalised – must be incorporated into this process for it to be successful.

She praised the youth presence at the conference – both for their contribution to the negotiation process and their acts of protest – for an outcome that alone does little to secure their future.

“What needs to happen now,” she says, “is action and implementation of the commitments we see on paper, otherwise the fair, equitable and sustainable future that we really want many be just a distant dream.”

Other NGOs too recognised the rays of hope that could be taken from the civil society presence at the conference, and the positives that can be taken away from the process.

Barbara Stocking, Oxfam’s Chief Executive said: “Rio will go down as the hoax summit. They came, they talked, but they failed to act.

“The People’s Summit was a vision for a future we want with people at its centre, and a rejection of business as usual. It’s been a painful birth but the vision of an ambitious set of goals on environment and development, applicable to all countries, is a solitary light in the fog of Rio.

“But we need one set of goals for the people and planet – ending poverty and protecting the environment are inextricably linked and cannot be addressed in isolation.”