In the end, Rio+20 has been a bit like watching two steam rollers about to have a colossal and inevitable head-on collision.

The need for action is immense and the solutions are largely achievable. We need 3% more food in order to ensure no one goes hungry, yet we waste 30% of what we produce.

Global greenhouse gas emissions continue to grow and the IEA says the door to preventing temperature rises of more than two degrees is about to close.

All commentators regardless of background or location said the same thing, ‘nothing will come from Rio’.

Many NGOs were already focusing on what would happen after the summit before it began. David Cameron’s press office said there was a high-level delegation attending in his absence and there was not going to be any need for the Prime Ministerial seal.

Even Christiana Figueres, the superbly energetic and optimistic head of the UNFCCC, which oversees climate negotiations, was keen to put the brakes on any hopes of a world-changing agreement.

But after hearing the same things said about the UN climate talks in Durban this December, where expectations were exceeded, albeit with a precariously delicate agreement, I held out some hope.

Then yesterday, I realized not only had the deal fallen below the extremely low expectations, but that the politicians had settled for this unsatisfactory conclusion. 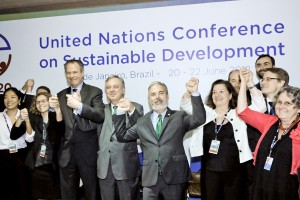 Celebrations of the draft agreement were muted and awkward. (Source: Maria Elisa Franco)

Complex issues, such as how to measure the success of a goal as broad as ‘development’ have meant even the draft agreement was hard to fix. Talks around rich-poor flows of finance made the former clam up and the latter unwilling to sign-up to promises that it had no means to pay for.

Even the Sustainable Development Goals (SDGs), a near universally liked concept similar to the Millenium Development Goals, failed to get off the ground. The phrase “sustainable development goals” does not feature in the outcome document at all. Instead there is slightly vaguer wording that suggests a process to discuss SDGs development will come later.

Yesterday was the second day of the high level summit, the first full day given the formalities of the first. There were no frantic breakout groups. No spontaneous meetings spilling out in to the cafeterias to force last minute concessions and raise ambition. Diplomats were not pacing the halls on the phone back to base.

Instead, as the heads of state and ministers arrived, it was pretty much agreed that the draft document would be ratified as it was. That fact, possibly to same extent as the document itself, is truly depressing.

Much of the debate in the build-up to Rio+20 focused on which world leaders were and were not going to be in attendance. The question now given the absence of any high-level negotiating, is why did those senior figures that did deign us with their presence bother?

The challenge now is for all parties to take these disappointments, assess what was missing in Rio, and fill those vacuums through other channels.

Rio was an opportunity to write a stay of execution for future generations. Instead, we co-signed the death warrant written by our mistakes in the past.