Hanna Thomas: Why I walked out of Rio+20 summit in despair

Today was the last day of the Rio+20 summit. But instead of following the negotiations, as I have done over the past week, I remained outside.

I was not even allowed to go into the Rio Centro conference centre this morning as, yesterday, I stepped out of the proceedings, and turned in my accreditation badge.

I was not alone. 130 participants of the conference – young, old, women, men, and children alike – occupied a central space for 3 hours and held a People’s Assembly. 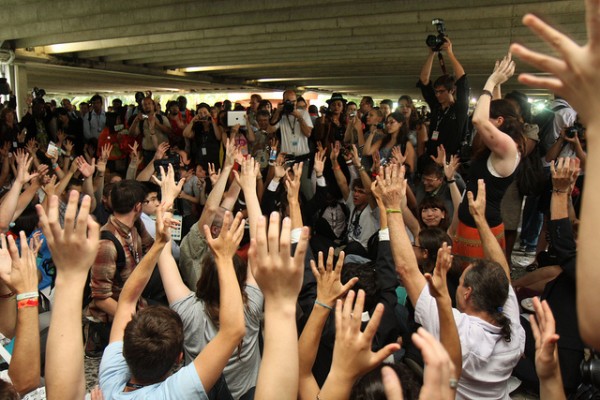 We used the human mic technique, popularised by the Occupy movement, to amplify our voices. Voices that were frustrated and dissatisfied with the final text, voices that ultimately rejected our world leaders and the processes by which they have failed us, again.

And they have failed us.

The text of the final document has not changed since Tuesday morning. Heads of states and other leaders have flown into Rio from all over the world, at great carbon cost, and for what? For photo opportunities? To give a 3 minute speech on a podium?

They have not negotiated on our behalf, and we are left with a document that adds little to the original Rio Declaration of 1992.

When you consider the current context – the fact that we now know so much more about the effects of climate change, and the fact that the gap between rich and poor is becoming ever wider – it is not hard to see that the global sustainable development agenda has taken a step backwards at this summit.

It has taken our governments 20 years, to agree that they agree to what they agreed 20 years ago. And they plan for it to take another 20 years to implement any action. Take what the Brazilian Environment Minister, Izabella Teixera, said this morning:

“We are looking towards Rio+40 or Rio+60. The number of years doesn’t matter: the important thing is the ‘plus’.”

The number of years doesn’t matter. Is that what they think? Or, is that what they hope, because they know that they won’t be the ones at the negotiating table (or even, alive) when 2032, or 2052, rolls around.

As young people, we know better. We know that the science demands that we deal with our unsustainable patterns of production and consumption within the next 3 years. Otherwise, we are looking at a temperature rise of 6C before the end of the century. We know that the number of years does matter.

There is no excuse.

We have the knowledge and the tools at our disposal to make the transition to a just, green economy. All we are lacking is the political will. Yesterday, I came to the conclusion that the solutions to our problems do not lie within UN walls, where posturing is more respected than commitment, where words speak louder than actions.

During the People’s Assembly, we collectively came to an agreement that the future we want, is not found here. At 4pm, we walked out together, in solidarity with all those in civil society whose voices had not been heard during the negotiations. We collected our badges, and turned them in, not intending to come back.

Let me be clear. We did not walk out because we did not want to be a part of the process. All of us had worked to get there, to be heard by the people in power. But they were not there. They were not negotiating, and they were not listening.

Nor did we did walk out to send a message of hopelessness. How can I be hopeless, when I have witnessed so many people fighting for themselves, their people, and for future generations?

Rather, we recognised that we had to look outside of this conference for the solutions – to the People’s Summit, which is being held on Flamengo beach, and where thousands of citizens from around the world, many from indigenous communities, have gathered to share their knowledge.

Rio+20: The People’s Conference from Responding to Climate Change on Vimeo.

This has been my third UN conference. I was always worried about losing my badge before, because it is so tempting to think that at the next conference, or the one after that, things will be solved. But today, I question the power of the UN to solve our problems.

I question the power of our governments, and of nation states. We are experiencing an unprecendented crisis of global governance. From the eurozone, to the corruption of wall street, to Egypt and Syria, and back here to Rio+20, we must ask ourselves how adept, and how able, our leaders are at acting in our best interests.

When corporations hold the same rights as people, when Nick Clegg visits a football museum rather than negotiating a text on sustainable development (true story), I can no longer sit by and observe this process and hope to be heard.

I left this process, not because I am hopeless, but because I have work to do. And our leaders, our governments, are getting in the way.