By Daniel Schweimler
RTCC in Rio

“What! You walked unaccompanied into a favela? Are you mad?”

That would, just a short time ago, have been the common response to anyone who visited Brazil’s notorious shanty towns that litter the landscape both in and around the country’s major cities.

But RTCC was able to visit the Babilonia favela just a short walk from Rio’s iconic Copacabana beach. We were welcomed by smiling faces, barking dogs and an ice-cold drink half-way up an arduous climb.

Many of Rio’s favelas have been pacified. That means the authorities have wrested control from the drug gangs that used to hold sway over the favela populations, ruling with terror and a frightening array of weapons.

A new police station guards the entrance to the community at the bottom of a steep hill. The former mud path that wended its way through the thickly wooded mountainside to the roughly built, sometimes precarious homes in the community is now being turned into a paved road, brand new heavy machinery in operation.

The city authorities are proudly showing visitors around, picking up tourists at the big plastic installation erected on the beach front to celebrate Rio+20.

That was designed by architects, Sarah Swolfs and Patricia Padilha from the local company, Barst. It was built by workers from the favela and reflects and represents their homes which are just a short walk but another world away.

The idea is that the favelas be reincorporated into main-stream Rio life. That means the favela residents becoming an intrinsic part of the city that surrounds them and beneficiaries of Brazil’s economic boom, while encouraging Rio residents and others to no longer fear walking into communities that they could previously see but dare not enter. 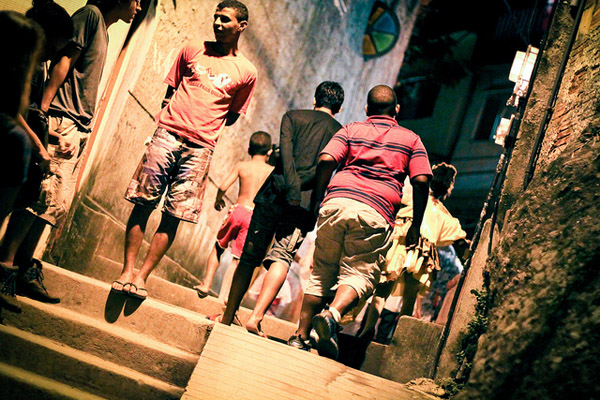 The Babilonia favela remains poor, but it now has a wealth of reasons to be optimistic about its future. (Source: Flickr/fora do Eixo)

With Rio+20 now and the football World Cup and Olympic Games coming to Brazil, the authorities are aware they’re under the international spotlight and there’s still much work to be done.

There are still poverty and inequality in the favelas. Many in the communities remain wary of a heavy-handed and sometimes corrupt police force, while politicians at all levels are trying to establish trust with people who have long been marginalised and ignored.

But change is definitely in the air, allowing RTCC to tread where it wouldn’t have been safe or wise to venture just a short time ago.