Zammit Cutajar: Rio+20 is just one step on the long march from Stockholm

That is one way of illustrating the issues that the global community should address at the Rio summit in June.  It is something of a caricature but telling nevertheless.

It reminds us that sustainability requires not just a technical fix but also a political commitment to fighting poverty and a moral recognition of the interests of future generations.

The 1972 UN Conference on the Human Environment that opened in Stockholm on 5 June that year – subsequently designated World Environment Day – launched the “global green flag” on a long march that has led through Rio and Johannesburg, and now to Rio again.  Much has been achieved along the way – through regulation, economic incentives and education – to entrench cleaner production technologies and more intelligent modes of consumption.

With growing prosperity and widening awareness, the common sense of saving energy and other resources has made great strides in many societies, as has the demand for efficient infrastructure and public services.

The road from Stockholm has not been easy, however.  While the green flag flies high in political rhetoric, it is often marginalized in economic decision-making. Political and economic defensiveness and “short-termism” pose formidable obstacles to the mainstreaming of sustainability. When the chips are down, the political knee-jerk reaction is to focus on hard-core economic issues: jobs, access to basic needs.

These tensions between present and future, between rhetoric and reality, are nowhere more evident than in the negotiations on limiting human-induced climate change to a manageable level – the headline issue at and since the last Rio summit in 1992.

The negative consequences of dumping greenhouse gases in the atmosphere – historically by developed countries, increasingly by emerging economies – are far ahead of current political calculations.  The damage is not full-frontal but surreptitious, not a catastrophic bang but a stealthy creep.  Attitudes towards it are influenced by a counter-campaign of pseudo-scientific doubt.

Addressing the climate challenge is further complicated by the sheer difficulty of converging towards agreement on the global good in a negotiating dynamic that is not driven by tangible reciprocal concessions, such as occur in the fields of disarmament or trade.  The lasting success of this negotiation depends on intangibles: ethics, equity, responsibility and political will. 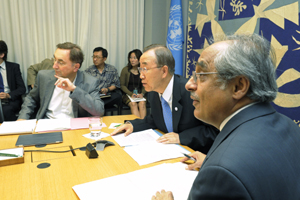 Rio is a rendezvous for leaders of governments along the road from Stockholm.  What are the signs of hope that they could offer from this staging point?

First, that governments are focused on promoting the development of the real economy that responds broadly to people’s diverse needs, rather than the generation of froth by abstract markets.

Second, that governments are integrating sustainability in their economic strategies and decisions.  It would be positively symbolic if heads of government decided to be accompanied to Rio by their heavyweight ministers responsible for economy and finance, not just by their environment ministers.

Third, that governments recognize not only the up-front costs of investments in a cleaner economy but also the collateral benefits – for example, the benefits that efficient use of cleaner fuels bring to respiratory health.

Fourth, that governments understand the need to provide frameworks and incentives for investment in sustainability to be profitable.  In a market economy, a sense of the profits to be gained from innovation for the long-term must be one of the main drivers towards sustainability.  Examples of responsible initiative by smart business exist and should be highlighted.  Corporations can often take a longer view than governments – but governments must point the way.

Finally, that governments are committed to fighting poverty at home and abroad. When the “human environment” was put on the global agenda at Stockholm 40 years ago, only one foreign head of government participated in that event: the Prime Minister of India, Indira Gandhi.  She proclaimed then that poverty was the worst form of pollution.  That profound sound-bite still echoes.

It should be played back at the opening of Stockholm+40 in Rio.

Michael Zammit Cutajar was Executive Secretary of the UNFCCC from 1991 to 2002 and subsequently Malta’s Ambassador on Climate Change to 2011.  In his early UN years, he served on the secretariat of the UN Conference on the Human Environment (Stockholm 1972).