Rio+20: The underwater lab that could unlock the secrets of the ocean

Plans for a new underwater ocean observatory are on show at Rio+20.

The SeaOrbiter is a 58m long drifting exploration vessel that will allow a team of 18 researchers to live in open water up to five-months at a time. Ocean observations are currently limited to around five weeks as traditional vessels require refueling. 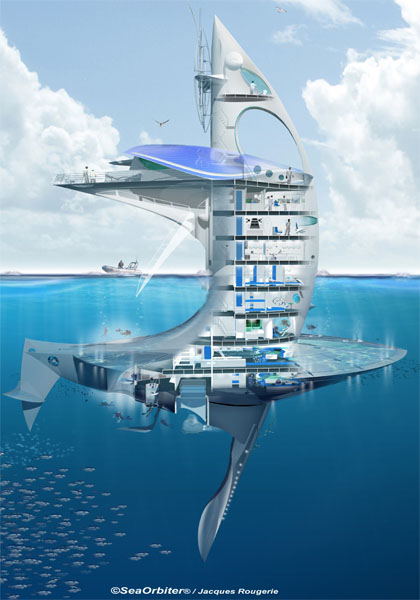 “It lets scientists observe the ocean, under water 24 hours a day, that has never been possible before,” said Ariel Fuchs, director of science, education and media with SeaOrbiter.

“Humans have often characterized the ocean as a glimmering surface, we want to change that,” said Fuchs.

“At the moment scientists use floating buoys, mini-submersibles and drag instruments behind ships. It is only possible to really measure 1% of the ocean this way and if you include the sub-sea, that number is even smaller.”

The aluminum vessel is powered by solar panels and wind turbines that also run a desalination unit. The craft will also be fitted with a waste compactor ensuring that it attains a “zero-waste” standard.

As well as enabling research at the highest scientific level – NASA, NOAA and the Scripps Institute are among those to have registered an interest in the project – it will also look to provide an online educational resource for young people.

The craft is funded principally by Rolex with construction beginning in October this year and a six-month testing mission scheduled in 2014.