Here the Shanshui Conservation Center’s Meng Si explains how one small community in south-west China is fighting drought with some simple and inexspensive solutions.

Climate change is ever more visible in our lives, and rising numbers of people have personal stories to tell about the harm its impacts can inflict.

But do communities that have so far been left unscathed realise they may have been protected by nature?

If you mention climate change to the people of south-west China, most of them will talk about last year’s great drought. 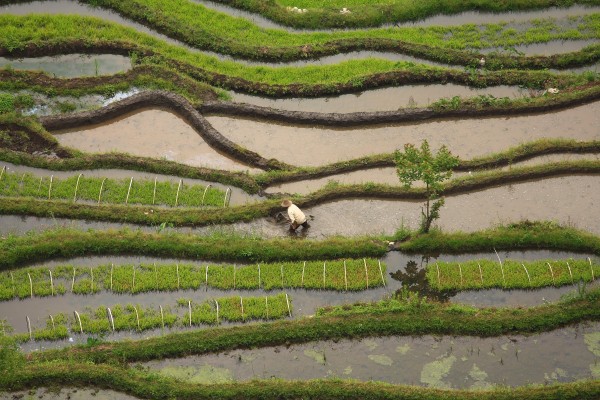 From September 2009 to March 2010, Yunnan province saw just half its normal rainfall for the time of year – the lowest level since 1951.

But Wen Cheng has more vivid memories of a drought in the early 1990s, when he was 10 years old.

He remembers taps working for only a few hours in the middle of the night, and even then producing only a trickle. If he wanted to wash, he had to go with his parents to the public bathhouse.

Wen’s hometown, the small city of Gejiu, was largely unaffected by last year’s drought, unlike surrounding areas. Water here was not rationed.

Wen, now a post-doctoral fellow at Peking University’s Centre for Nature and Society, says his research has found that forest water sources are to thank for relieving the city’s thirst.

“Gejiu has the best forests for 50 or 100 kilometres,” he said. “The forests on the two mountains next to the city have never stopped providing water.”

Gejiu’s economy has developed through mining rather than forestry, Wen explained, and so the trees have been left alone.

The forests are now in a better condition than they were in the 1990s, and so are better equipped to cope with disaster such as drought.

After last year’s crisis, NGOs started investigating water supplies in the area. Beijing’s Shan Shui Conservation Center launched a project called “Remember the Source”, which focused on areas that had suffered least during the drought.

Wen was an adviser to the project.

“These places were less badly affected because of the types of industry locally, or because the locals had protected forest water sources. In the east and north-east of Yunnan, where the drought was the most severe, there is no decent forest – and so no water to use.”

“Simply put, they had been mostly relying on courses of bamboo or wood troughs for water supply, and we’ve put in more reliable infrastructure,” Wen said.

For example, at Huanglianshan Reserve, Shan Shui and the reserve’s managers worked with locals from the villages of Longi, Yangzhai and Yanluo.

A pumping station was built and connected to new taps in the villages via water pipes varying between 2.5 kilometres and 4 kilometres in length. In this way, the forests in the reserve provide water for the villagers. 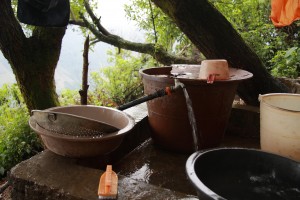 The soil in Yunnan is mostly loose and sandy. Trees fix that soil and allow it to retain water.

Moist air travels all the way from the Pacific and the Indian Ocean, and is trapped by the mountainous forests of Yunnan – which soak up the moisture like sponges, earning them the nickname “mountaintop reservoirs”.

Without these trees the moisture escapes, and both soil and water are lost.

Wen said that the locals refer to these forests as “dragon forests”, as a mark of their respect.

Not only have these areas protected the city of Gejiu from drought, you could also say they have nurtured the local Pu’er tea and rice growing cultures.

In the Ailao Mountains, the terraced fields of the Hani minority have created unique scenery. Dykes surround layer upon layer of paddy fields, which shimmer in the sun.

In June this year, China National Geographic wrote that “the heart of the Hani terraces, Yuanyang, has tens of thousands of mu[one mu is around 667 square metres] of paddy fields, yet not one single reservoir – the terraces are watered naturally.

The expanses of terraced fields form a huge wetland and, combined with a dense network of waterways, this provides the moisture for ample precipitation, which is captured by the forests further up the mountains and fed back down to the fields through springs, streams and waterfalls.”

There is a complete agricultural ecosystem connecting the forests, villages, terrace fields and rivers. The traditional working methods and the faith of local people in their techniques work to protect this ecology.

The “dragon forests” once stretched across the map of south-east Asia, from the edge of the Himalayas in Yunnan, through the Chinese south to Taiwan and on to southern Japan, where they are named after the sun god. These water-rich forests nourished the rice-growing culture of this segment of the world.

The “Remember the Source” project wasn’t just about providing water in a few selected locations. It also aimed to draw attention to these forest water sources and the value of mature ecosystems.

Only during a crisis, said Wen, can you see that not all forests are equal: they may all be green, but only the water sources in forests that have existed for hundreds or thousands of years can stand the test of natural disaster. Mature forests have gone through centuries of natural selection by extreme climate events. How many “droughts of a century” must they have survived?

“You could even say those rare occurrences aid forest conservation,” said Wen. “They kill off the weak artificial forests, and allow the stronger primary forest to renew and expand.”

Mature ecosystems have an important role to play in climate change adaptation. But in China today, “over-mature” forests, far from being protected, are often felled.

The vast bulk of China’s forests lie outside of reserves, and large swaths of “over-mature” forest have been cut down and replaced with young trees.

Outsiders may praise the beauty of the terraced hillsides, but locals here endure back-breaking work for tiny incomes.

In the past, they had only alcohol to wash away their worries, but now young people have an alternative: they can leave.

Many do so and find work elsewhere, never returning to farming. Their parents continue to work the fields, but won’t do so forever.

End of an era 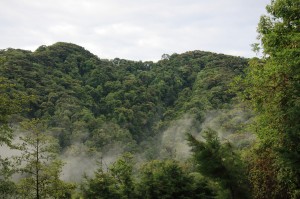 When nobody needs to provide water for their terraced fields, there will be no motive to respect and protect the forests.

Shan Shui’s Xue Ting wrote in a follow-up report to their project that the entire Red River valley is “returning farmland to forests”, but the farmland being lost is the terraced fields that are the product of generations of wisdom.

Those fields are being turned into single-species commercial plantations of banana and rubber trees, which have little ecological value.

This area was hit badly by last year’s drought and the harvest was almost completely lost. More than half of the banana trees died, said Xue.

Primary forest is being replaced by imported commercial crops, and those crops cannot help communities to adapt to climate change in the same way.

Wen, who grew up here, is not optimistic about the future of the terrace farming culture. But he does think that the terrace field ecosystem is an excellent example of how forest water sources and people can co-exist.

Protecting those forests massively boosts the ability of a community to cope with climate change, and the water sources in mature forests are the most resilient of all.

The forests around Gejiu only covered a small area in 1926. Since then, they have grown to cover two mountains. Wen believes this is about how long it takes to create a forest water source – around 80 years.

But, he says, you need a “mother forest”, consisting of at least some primary forest. Wen believes the “Remember the Source” project will really prove valuable if it can trigger the creation of a forest water source for every community.

For the Hani people of Ailaoshan, this will depend on how incomers treat the forests. For other Chinese cities, it will depend on when urban residents start to understand their own sources of water.

Meng Si is from Shanshui Conservation Center, a Chinese NGO engaged in nature conservation work in Southwest China and the Tibet-Qinghai Plateau specialising in Ecosystem based adaptation (EbA) an effective and economical approach to adapting to climate change.