Rio+20 Business Focus: Putting sustainability at the heart of Belgium’s Antarctica base

Here Brigit Fremault from the Federation of Enterprises in Belgium and Alain Hubert of the International Polar Foundation explain how the Princess Elisabeth Antarctica research base sustainability measures help scientists to study with minimal environmental impact.

The state-of-the-art building, perched on a rocky outcrop above the polar ice cap, was designed and is operated by the International Polar Foundation on behalf of the Belgian Polar Secretariat, and created through the cooperation of public and private partners.

The station welcomes scientists from around the world who travel to Antarctica to study its unique environment and serves as a beacon of how we can leave lighter footprint on the Earth’s environment, and a strong reminder of the integral role played by the polar regions in our planet’s climate mechanisms. 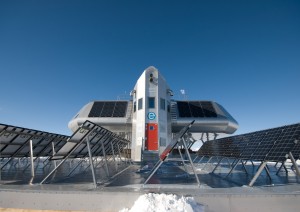 Buildings accounts for over 40% of global carbon emissions according to the IEA; Princess Elisabeth Antarctica responds to this challenge by using efficient building technologies to minimise energy needs.

The station uses an innovative micro smart grid to regulate and prioritise electricity use, making it three times more efficient than any existing conventional energy network.

The smart grid power demand management also influences human behaviour, such as how we use energy; scientists and staff quickly learn the importance of not wasting electricity.

But smart grids aren’t just for Antarctica, or for the cutting edge of scientific endeavour – while Princess Elisabeth station demonstrates new ways for harnessing readily accessible energy technology, these new ways are now being put to use in mainstream projects that redefine how we use energy in homes, offices and schools in every town and city across the world.

Princess Elisabeth Antarctica travelled from the drawing board to reality by enlisting the power and know-how of multiple partners who helped finance, develop and complete the project.

By combining the mobility of a small reactive team of workers on the ice of Antarctica, and the strength of corporate and public partners who understood the importance of polar science and the goal of zero emissions, the International Polar Foundation acted as a catalyst to show how a strong spirit of entrepreneurship between business, governments and citizens can achieve a low carbon future, and successfully meet the climate challenge.

The innovative technology and equipment used at Princess Elisabeth Antarctica are the fruit of know-how from Belgium and beyond. 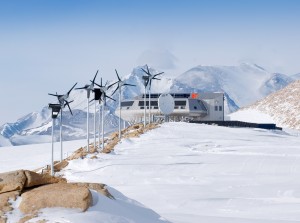 The base was the work of multiple partners who helped finance, develop and complete the station (© Rene Robert/International Polar Foundation)

Princess Elisabeth Antarctica continues to uphold the values of cooperation, by becoming a nexus of international scientific cooperation, where researchers strive to further our understanding of the Polar Regions, of our climate and our planet – working to anticipate changes, and to communicate their findings to the wider public.

During the 2011-2012 season, geologists, glaciologists, microbiologists, seismologists and meteorologists from Belgium, Germany, Japan worked at Princess Elisabeth, the largest and most logistically demanding season at the station since operations began in 2008.

In cooperation with the corporate sector, Princess Elisabeth Antarctica will continue to grow its capacity for zero emission operations, by constantly improving its energy systems; it’s also set to apply the zero emission factor to transport and mobility, with future prototypes of electric field vehicles planned for scientists’ logistics in the field.

During the 2011-2012 season, geologists, glaciologists, microbiologists, seismologists and meteorologists worked at the station (© International Polar Foundation)

The successful use of renewable energy and energy efficiency at Princess Elisabeth Antarctica shows that it is possible to meet our climate obligations by choosing new ways of behaving when it comes to using energy in our homes, workplaces and cities, so that we can lay the groundwork for a truly sustainable economy.

Birgit Fremault is Environment Advisor to the FEB (Federation of Enterprises in Belgium), Alain Hubert is President of the International Polar Foundation