Here myclimate explains how they are helping communities in Brazil’s Amazon to ditch rainforests for FSC woodchips for their electricity production.

This small-scale project is the first project worldwide that produces emission certificates on the basis of sustainably harvested biomass from FSC (Forest Stewardship Council) certified forestry.

Precious Woods, which was the first company in the Amazonas to receive FSC certification for its environmentally friendly and socially responsible forest management, installed the woodchip power plant with 9 MW of electrical output.

The project replaces several diesel generators and supplies the sawmill of the company as well as the 80,000 inhabitants of the town Itacoatiara in Amazonas with climate-friendly power.

The plant produces annually up to 56,000 MWh of electricity, for which otherwise around 5 million liters of diesel would be consumed.

The waste heat generated during this process is used for the wood drying plants.
For the production of the electricity, around 100,000 tons of wood are required annually.

These are delivered in the form of wood waste and sawdust from the sawmill. All this wood waste comes from sustainable forestry in accordance with FSC guidelines.

Prior to start-up of the plant, a part of this wood waste was rotting in unmanaged piles on the property.

Through the sustainable use of the waste, a reduction of the greenhouse gas methane was also possible.

The total reduction from the energy switch and avoiding the methane emissions amounts to about 45,000 tons of CO2 equivalents annually. 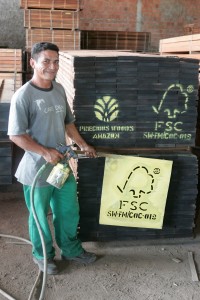 The 100,000 tonnes of wood needed annually are supplied in the form of wood waste and sawdust from the sawmill

In the implementation of its carbon offset projects, myclimate does not only focus on the ecological aspect of greenhouse gas emission reductions, but also on the economic and social benefits for the local population.

This is the prerequisite to register the projects under the Gold Standard, a label for projects that not only reduce emissions but also contribute to sustainable development.

Like other myclimate offset projects, this Brazilian project is registered as a Gold Standard as well as a CDM project.

These high quality projects are offered to forward looking companies as well as individuals around the world which voluntary offset their emissions.

A growing number of businesses and organizations participate in these activities of the Swiss non-profit foundation myclimate.

Being an indigenous and cleaner source of electricity, the project in Brazil also enriches the environmental and social aspects of the local community and contributes to the regional economic development.

Owing to the power plant, the local population benefits from lower energy prices and a more stable energy supply due to reduced lines losses and increased system capacity. Other benefits are the creation of local jobs as well as a better income distribution in the region.

The local municipality benefits from lower expenditures as it no longer needs to import diesel or electricity from other regions as the biomass is locally produced.

These funds can therefore be spent in other critical areas such as health and education.

Rio spread the seeds around the world for environmental and social businesses. myclimate was one of those that began to sprout in the year Rio +10.

While having developed from a small initiative into a professional and successful foundation for climate protection, we are still at the very beginning.

The potential for climate protection is much bigger then the one realized today. With the worldwide growing need for clean energy, the potential for such projects is even growing.

What is needed is the commitment from companies, organizations and individuals, to put this potential into reality and take the responsibility for one’s own emissions!