The Rio+20 summit can kick-start a new approach to development, the Brazilian Ambassador to the UK has said.

“I think people are very much more into environmental issues today and that opinion makers are aware that there is more expectation,” he said.

“The expectation [at Rio+20] is that the world will take time to look into the retrospective of what is taking place and what has to be done.

“We look at this conference as opening new doors for a different approach to development and sustainable development in general and not closing a stage. On the contrary, it’s opening a new role for countries, enterprises and people in general to play in a different relationship with the environment,” he added.

Jaguaribe, who acted as a liaison to the Nicaraguan delegation at the original Rio summit in 1992, said that conference had a major impact in the host nation.

“For Brazil, it was a major point of inflection. Prior to Rio 92 there was a predominant perception that we dealt with the environment at our own cost, that we were sovereign to deal with it and that most requirements from outside, were just limiting our ability to develop. 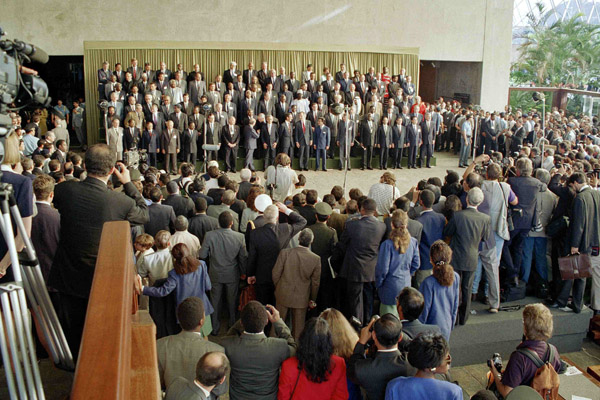 103 heads of state pose for their photo at the original Earth Summit in Rio, 1992. (Source: UN/Tom Prendergast)

“After Rio ‘92, the environment and biodiversity became increasingly incorporated, as they are today, into the Brazilian patrimony of wealth. The importance attached to that has been increasing since then,” said Jaguaribe, adding that this same policy could be expanded at Rio+20.

“Sustainable development has three very important dimensions; the social, the economic and the environmental dimensions. It is impossible in our view, to work on one without the others. We want to bring them all together and that would be a very good result for Rio+20.”

Negotiations on the draft agenda for the meeting have been tortuous with a final preparatory session in Rio this week the last chance to prepare a document for the ministerial delegations to sign-off in the closing days of the conference.

A number of proposals have been mooted for the conference including the creation of formal Sustainable Development Goals, creating a new development index (to replace Gross Domestic Product) that incorporates non-economic factors, cuts to fossil fuel subsidies and improving access to energy.