Dramatic sea-ice melt in the Arctic caused by climate change could be hitting closer to home than thought for millions living in the US and Northern Europe.

New research, published in the journal Oceanography, found that the melting of Arctic sea ice in the summer could be causing a domino effect, increasing the chances of severe winter weather outbreaks in the Northern Hemisphere’s middle latitudes.

This could mean more frequent cold snaps gripping much of the US and Central and Eastern Europe. 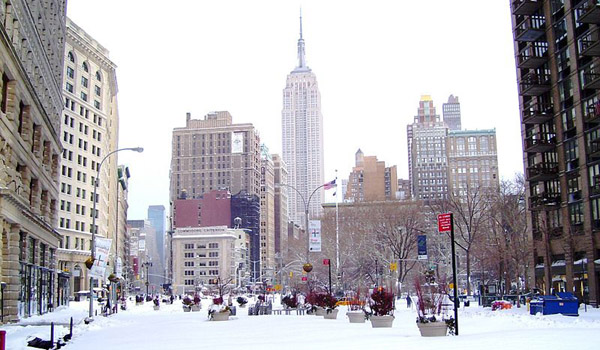 The report uses the examples of the “Snowmageddon” storm which hit Washington DC in February 2010, or the cold snap which covered much of Central and Eastern Europe in mid-January this winter with some temperatures hitting -30°C.

This causes excess heat to be released into the atmosphere, especially during autumn, decreasing the temperature and atmospheric pressure gradient between the Arctic and middle latitudes – weakening the winds associated with the polar vortex and jet stream.

With the paper published just after the Eastern US had experienced one of its warmest winters on record the report’s authors say the study shows the complexity of climate systems and their impacts on regional weather.

This winter, La Nina in the Pacific meant that while many parts of the Northern Hemisphere were hit by severe winter weather patterns, much of the Eastern United States basked in warm tropical air.

“A lot of times people say, ‘Wait a second, which is it going to be – more snow or more warming?’ Well, it depends on a lot of factors, and I guess that was a really good winter demonstrating that,” said report co-author Charles Greene. “What we can expect, however, is the Arctic wildcard stacking the deck in favour of more severe winter outbreaks in the future.”