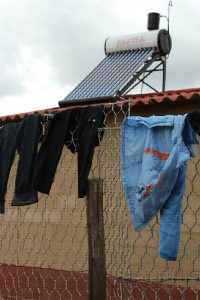 High unemployment is a familiar scene in many towns across Africa. Meanwhile, many households are spending 20% of their available income on water heating.

In some cases families have to choose between food and hot water.

One CDM project in South Africa aims to tackle both of these problems, installing solar water heaters to households, while offering employment to local communities.

On the sidelines of the Durban climate conference, a group of journalists travelled to visit one project on the outskirts of the city.

Here 25 jobs have been created through the projects, many of which could become permanent as the scheme moves to other neighborhoods in the area.

In the twelfth in the series of UNFCCC CDM Radio Club reports RTCC is hosting, David Mwanza a radio producer from Zambia National Broadcasting Corporation visits the site to see what benefits the CDM scheme has brought.