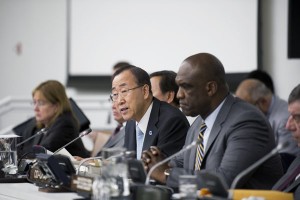 There were angry scenes at the UN in New York this week as negotiations on the Rio+20 draft agenda became frayed.

The International Institute for Sustainable Development (IISD) reports that one of the Co-chairs of the talks called for a break to allow things to “cool down”.

Diplomats are drawing up a draft document that will form the basis of the ministerial talks at the Rio+20 sustainable development summit next month.

The talks have proven to be more complex than imagined with the agenda ballooning in size once discussions began, creating more work for delegates who must cut the text down in to a manageable but effective document.

Another chair, Sook Kim, expressed his own disappointment with the progress telling the delegates: “You are expected to turn the text from a tiger to a lion, but you changed it to a bird.”

The current session is an additional emergency round of talks organised after the previous meeting failed to make sufficient progress.

Ban Ki-moon opened the latest set of talks and warned negotiators that “time was running out”.

Is the Rio roadmap doughnut shaped?

What makes a good sustainability leader?

Five reasons why we need Rio+20