Gas and climate change: Can we drill our way out of four degrees?

New resources of shale gas have been presented by some as an easy solution for developed countries to cut their carbon emissions by replacing, dirtier, coal plants with shiny new gas ones.

The IEA has put together a report assessing the best conditions for responsible extraction of this gas, plus some projections for what it would mean for our climate.

Even if it is cleaner than coal, burning gas still means adding more carbon to the atmosphere. So is there any role for gas in the shift to a low carbon economy?

Shale gas in the US has help the country replace a chunk of its coal fired power plants with gas. (Source: BHP Biliton)

By the time I’d made my way back from the IEA Golden Rules for Gas press conference, across St James Park and up Regent Street, the headlines were already aggregating on Google News.

The fact that they’re all correct indicates how complex the relationship is between the world’s energy mix and climate change.

In isolation, however all of these headlines are misleading.

The key statement from the IEA’s report is that regardless of whether we enter the scenario with lots of new shale gas being burnt or not, we are stuck with 3.5°C instead of the targeted 2°C. If we stick with coal the situation is far worse.

Some of my colleagues in the press were up in arms that this statistic was “buried” on page 91. One took issue that it was in the final paragraph of the summary.

“This report is not a promotion of gas, it is made to show how gas can be used as one of the fuels that bring us closer to a greener energy supply,” Maria van der Hoeven, executive director of the IEA, told RTCC after the event.

When I asked her about the extent of the role gas can play in cutting our carbon, she asked for a break so she could double check the figures, buried on page 91, so that she could be quite emphatic about it.

“On its own, a higher gas model, with our golden rules scenario, emissions are cut by 1.3% but we’re still looking at a rise CO2 levels of 650ppm which is about 3.5°C,” she said.

Fossil fuels for the foreseeable?

The effect of an influx of shale gas would lower prices. The benefits are doubled-up for places like the EU, which is a net importer of gas and also has its own unconventional gas to consider tapping.

If it did, it would need to import less gas, and the supply it did still need to buy, would be done so at a lower price. 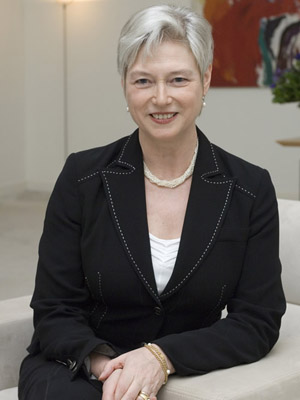 Maria van der Hoeven stressed that gas is only part of the solution for a greener energy future. (Source: IEA)

So given this tempting situation, will governments realistically continue to bankroll subsidies for renewable energy?

Should we be looking to cut all fossil fuels from our energy diet as soon as possible or is there future for renewables and gas to work together?

“Yes there is, maybe some day we will have just green energy, but by 2050, we’ll still be relying on fossil fuels for 75% of our energy,” said van der Hoeven.

The IEA believes gas can provide a constant supply to underpin renewables, which can be turned down at the tap when the winds blow harder or the sun shines brighter.

“Lets see to it that the use of this fossil fuel is as clean as possible. That we use carbon capture and storage where we still have coal-fired power plants for example. At the same time, see to it that governments go on investing in low carbon technologies and go on investing in renewables, because they need to be cost effective and they are not always as cost effective as they should be.”

WWF were quick off the mark to issue a response to the report.

“Those who claim that shale gas is some sort of wonder fuel that can tackle climate change are seriously misleading the public – the reality is that it is a dangerous distraction from energy efficiency and clean renewable energy,” said Keith Allott, head of climate change at WWF-UK, echoing the IEA’s own position.

The main threat of gas is again the consequence for continuing investment in other areas.

“In a country like the UK it is important to recognise that there is not even a short term benefit to the availability of shale gas. Dirty coal was on its way out before shale gas turned up and the prospect of a dash for gas now appears to be the biggest threat to meeting UK carbon targets,” said Allott.

The direct result of a dash for gas, under even the strictest rules, may be a small drop in carbon emissions.

But if an indirect consequence is a dash for the exits from renewables investors and policymakers, it may not be worth the risk.