Rio+20 Business Focus: Climate Group explains how LED lighting can cut carbon emissions by up to 70%

LED lighting can cut CO2 emissions by 70%. This article explains how a partnership between HSBC and The Climate Group has seen LED lighting installed in 13 cities worldwide.

We are experiencing an unprecedented demand for energy and the Earth’s natural resources are under a growing strain. The world’s middle class will grow from less than 2 billion to 5 billion in the next 20 years.

In the same period China alone will build another “United States” in terms of homes and commercial buildings. It is clear that the implementation of innovative, low-carbon technologies is urgently needed if global emissions are to reduce by the required 80 per cent of current levels by 2050. 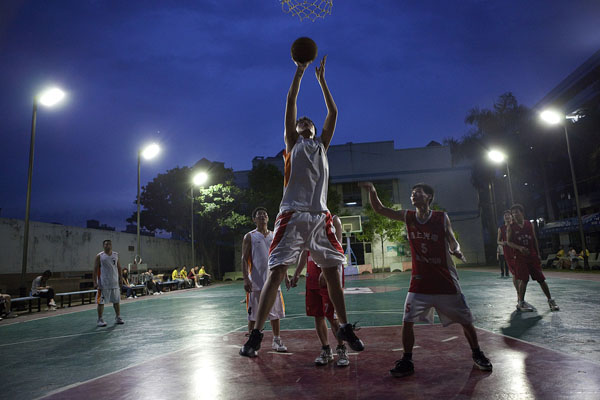 • Kingsun LED lights keep a basketball court lit near the Kingsun Lighting Company factory, one of the leading LED light producers in China. LED light technology is becoming more widespread throughout China and industry leaders in environmentally friendly LED lights are popping up in Dongguan. Copyright: The Climate Group.

The Climate Group, an independent, not-for-profit, organization, believes that real change will be most effective if directed by strong leadership. Mark Kenber, CEO, explains: “To drive forward clean technologies we need governments and businesses to display leadership that provides a positive and inspiring vision of tomorrow while answering the imperatives of today.”

LED (light-emitting diode) lamps are a clean technology that The Climate Group is promoting on a global scale. LED lamps are a low-carbon alternative to high pressure sodium (HPS), metal halide and fluorescent lamps that are typically used. Lighting accounts for nearly six per cent of global CO2 greenhouse gas emissions or 1,900 million tons of CO2 per year. Startlingly, this is the equivalent of CO2 emissions from 70 per cent of the world’s passenger vehicles.

The solution is simple; when operated with smart controls LED lighting can cut CO2 emissions by between 50 and 70 per cent. A full switch to LEDs could also reduce energy consumption for lighting by 40 per cent worldwide, translating to 130 billion Euros in running costs and 670 million tons of avoided carbon dioxide emissions per year.

With HSBC’s support, The Climate Group undertook a global partnership called LightSavers with 13 cities (including New York, Sydney and Kolkata) to pilot LED solutions in street and parking area lighting.

The trials provided compelling evidence that LED products that are widely available have reached maturity commercially. Reductions in price have brought LED street-lighting installations into the five-to-seven year payback range, spurring most of the LightSavers cities to scale up their trials.

For Gobind Saha, 61, owner of a roadside stall at Rabindra Sarani, India, LED lights are a testimony to how technology can impact the life of a common man. He said, “these white lights have changed the way my little business use to be under the street lights every evening. Earlier anything and everything would look yellow in colour resulting into a decreased purchasing interest among buyers but now that a buyer can clearly differentiate between a green and blue, my sales figures have gone higher.” 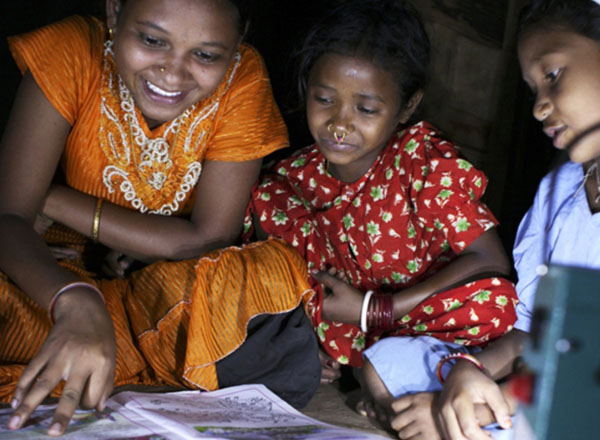 LED lighting in India can improve quality of life in the long term by boosting education. (Copyright: The Climate Group)

The Climate Group conducted further work with solar-driven LEDs, this time partnering with Philips for its 1,000 Villages Program. This was so successful that at the UN Climate Change Conference (COP17) in December 2011 The Climate Group and Philips were held up as an example of best practice for combining public-private partnership that enhances people’s lives in poor, rural communities while spurring green growth, saving energy and combating climate change.

Following on from the success of 1,000 Villages Program Philips announced in February 2012 that it had joined The Climate Group’s Clean Revolution campaign as the first Lead Corporate Partner.

Marc de Jong, CEO of Professional Lighting Solutions, Philips, said: “We have joined the Clean Revolution campaign as we believe it is an excellent avenue to further strengthen the case for LED lighting that can lead to dramatic savings in energy and spur low carbon growth.”

Mark Kenber, CEO, The Climate Group, said: “Over the next three years we will be working with Philips to highlight the opportunity for governments and corporations in investing in the low carbon economy with a focus on expanding the use of what is one of the most promising smart technologies, LEDs.”

Rio+20 is an opportunity to extend the dialogue around the Clean Revolution and encourage businesses and leading figures to work together to implement a swift and massive scaling-up of clean energy technologies and infrastructure.