Overfishing, warming waters, ocean acidification and pollution are all terms we are becoming more aware of as it slowly dawns on us that our oceans may not be the mysterious and resilient habitats we have often considered them.

As recently as 1998 the oceans heated so dramatically that a quarter of the world’s corals died – including between 70-90% of those in the Indian Ocean.

If the same event had been witnessed on land to our forests – considered the land-based counterpart of the coral reefs – urgent information and action would be demanded to find out what had happened.

It is only within the last decade that we have really begun to understand the role and the fragility of our oceans, recognising our impact on them, and what this could mean for our well-being.

In his most definitive work, ‘Ocean of Life’ the new book by professor Callum Roberts – professor of marine conservation at the University of York – makes a bold claim: “The oceans are changing faster than at almost any time in the Earth’s history and we are the agents of that transformation.”

Over the next week – before the book’s release on the 31st May – RTCC is going to focus in on some specific chapters to further explore Roberts’ claim. 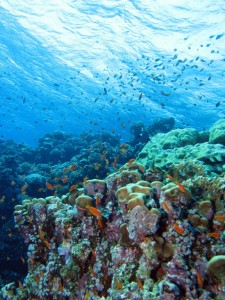 I picked this chapter of the book to focus our attention on as it is an area that has not been touched upon as heavily as many other ocean topics.

While many of us now are much more aware of the impact of warming oceans, the effects of acidification and the problems of overfishing, invasive “alien” species are less widely considered.

Roberts gives some stark figures in this chapter.

For example that the costs of invasive species could be as high as $1.4 trillion every year – including undoing any damage caused, eradicating the invading species or as a result of degradation and the loss of ecosystem services.

The majority of the species are being transported via shipping, either on the bottoms of the vessels or in ballast water. Roberts says that with more than 5000 vessels making their way around the world at any one moment, 10,000 species are thought to be in transit.

And all those other issues we are aware of when it comes to the oceans – climate change, over fishing, biodiversity loss and pollution – make it even harder, unsurprisingly says Roberts, for depleted local species to fight back against these alien invasions.

There are examples of these changes in species across the Globe, and Roberts divulges just a few examples of this widespread problem to the reader. For example the Lionfish explosion across the Caribbean, which some biologists have called ‘the most devastating marine invasion in history’ or San Francisco Bay where clam diggers are now more likely to find Asian varieties than native ones.

Even the poles – some of the most inhospitable oceans in the world – could be at risk, as melting sea ice has led to the mixing of seawater from the North Pacific and North Atlantic – as well as opening up new routes for sealife and the vessels that transport it.

And yet, Roberts pleads with the reader, to take notice of this problem. So far he says, it is not widely considered outside of conservation circles.

He writes: “Invasive species are one of five horsemen of the apocalyptic loss of biodiversity that is sweeping the planet (the others are habitat loss, pollution, climate change and overkill by hunting or fishing). Yet strangely, invasives have been neglected relative to the others, particularly at sea.”

And even where it is considered he warns, some of the past measures to combat the spread of threatening species have been somewhat misguided. One of the main attempts to rid areas of these invasive species in the past has been to introduce another, more threatening species, something Roberts compares with the old women who swallowed a fly. 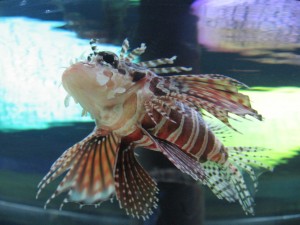 One example used by Roberts is the Lionfish which has spread across the Caribbean, threatening many local species (© Thirteenthbat/Creative Commons)

For those of you unaware of this particular children’s tale, Roberts explain his reasoning:

“The solution, in those days, usually involved introducing something else, following the logic of the old nursery rhyme about the woman who swallowed a fly and then a spider to catch the fly, and a bird to catch the spider, and so on, until she had eaten her way up the food chain. Like this hapless lady, who dies in the end you may recall the risk is that further introductions will do more harm than good.”

But do not despair – well at least not as much as you may be while reading this chapter – Roberts is not all doom and gloom. Where there are problems, you will also find solutions, and Roberts finishes the chapter by detailing a few such ideas – including regulations on ship ballast and coatings for boat hulls to prevent species from latching on.

Now you have a taster for the warnings that are in store for anyone picking up ‘Ocean of Life’, while underlining the problems our oceans are facing, Roberts’ ‘vital call to action’ (as described by celebrity chef and ocean’s campaigner Hugh Fearnley-Whittingstall) also aims to offer some real solutions.

Next week RTCC will take you through some of those solutions.

‘Ocean of Life’ is available for pre-order ahead of its release on 31st May.