I arrived in Bonn on Monday 14th to my first UN climate conference, and was immediately plunged in to a world of acronyms, policy wonks and anonymous delegates.

But in the Hotel Maritim conference centre I’ve also found struggle, frustration – and some hope.

Coming from working to promote an awareness of the need to act against climate change among young people in the UK, these negotiations seemed a world away. But it’s all about finding out how we fit into the puzzle to create the change needed for a better future.

Following on from the late night flurry in Durban in December, the word ‘equity’ has been everywhere in Bonn. But not with one simple definition.

We’ve heard from all countries all sorts of definitions about equity which have developed into arguments that may well continue into further UN climate talks – affirmations that equity is one of the central values of the UNFCCC have sat alongside attempts to discredit it as a foundational principle of the Convention.

Developing countries have used equity to enhance the principles of historical responsibility and common but differentiated responsibilities in building a global legally-binding deal.

But while the discussion of equitable treatment between developing and developed countries has taken centre stage, youth campaigners have been highlighting the concept of intergenerational equity. 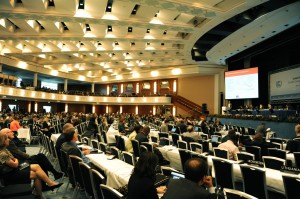 Young people do not have the same influence on these talks as negotiators – and yet it is our future that they are trying to figure out how to save. To safeguard intergenerational equity within the UNFCCC, countries must listen to the young voices here in Bonn and at home and respond with increased ambition pre-2020 – we can’t wait any longer.

Frustratingly, the talks do seem to be going slowly. The new Durban Platform still has no chair and no agenda after a full week of negotiations, after heated discussions and China breaking protocol over the developing country nomination to the co-chair position.

It’s essential here to make a distinction between justified long talks (the fact is that the chair and the agenda of this meeting can have an incredible outcome on our chances at securing a global climate deal that everyone thinks is fair and that will actually work) and that certain countries are abusing the procedure through delaying tactics as a way of slowing down progress on tackling climate change.

It can be incredible frustrating, but I keep trying to remind myself that it is behaviour like this that is the enemy to progress here, not the process itself.

One such example are the negotiations on ‘Article 6’, which focuses on providing education and raising public awareness about climate change. Who would think that educating people around the world about what is happening to their planet would be controversial?

YOUNGO, the youth constituency here, worked to great success in this area last week, and it looked like there was going to be a strong work plan ready for discussion in Doha.

However, the USA has this week delayed the negotiations to such an extent that this will now only be readdressed next May in Bonn. This is unfair, and is denying people the access to education about their future. It is exactly the opposite outcome we should be getting out of these conferences. 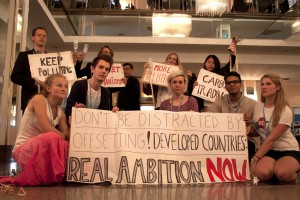 Nonetheless, I’m much reassured that so much positive action on climate change can happen outside of these negotiations. Meeting young people from across the world who have travelled, self-funded, to Bonn to campaign, lobby and work together to share ideas and resources has been an eye opener into the amount of impact we can all have on other’s lives.

We’ve been organising actions throughout the conference to highlight the need for developed countries to take real action, meaning substantial emissions reductions, before 2020.

We want them to prioritise their responsibility to use over fossil fuel industry interests, and we don’t want any shirking of responsibility behind fancy sounding new market mechanisms as a substitute for real emissions reductions.

Our actions have brought an energy to the delegate’s lunch times, while trying to condense the complex politics into the simple truths and visual images we can carry back home with us.

But we can’t do it alone. We need parties to step up to their responsibility.

Countries must make the most of the remaining negotiating time that we have within the window of opportunity to keep rising global temperatures within 1.5 degrees.

We need progress – countries draw together their ambition, urgency and sense of equity to deliver us a global deal to get us on the right track towards a secure, clean future.

Louisa Casson is Communications Officer at the UKYCC and a UK member of YOUNGO.

For more round-up from the Bonn Climate Talks:

RTCC’s round-up of the talks.

UNFCCC Chief Christiana Figueres defends the progress of the talks;

German Youth say negotiators must remember why they are doing this.