Bonn 2012: German Youth – ‘Don’t forget you are doing this for your children’ 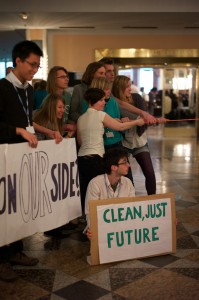 It is possibly the last meeting before COP 18 in Doha and the only one between the last and the next COP.

Due to the lack of clear outcomes, especially for the Durban Platform discussion, it was expected that we will continue to have lot of discussions on this area.

Someone described it really clearly to me: “It was as if had seen a nice chair and you you grab everything together you have and buy it. And then after you bought it you just think that the car isn’t as great as you thought: You think “Why did I buy it? It is not very usable!””

The same happened to the Durban Platform.

Being agreed in the last minutes of Durban, every Party understood its own interpretation under the decision.

To the public, these discussions often seem as though there is nothing happening at the negotiations, but they are substantial in reality.

But there were some steps back.

Article 6 is just one example of this. It is Article 6 of the Kyoto Protocol and focusing on raising public awareness and education. That’s why such a high importance is placed on this Article by the youth.

So here the youth, represented by YOUNGO, has been very active in pushing the states.

We had a lot of actions (about Market Based Mechanisms, the dirty industry lobby and the lack of ambition in AWG-LCA (Working group on long-term cooperative action) and AWG-KP (Working group on the Kyoto Protocol).

They got attention by delegates and some newspapers.

These were, like the interventions, as change to for all of the YOUNGO-people in Bonn to participate. 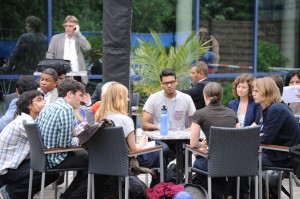 The interventions were one of the greatest opportunities we had to influence the negotiations. Being very political and using strong language, they got applause every time.

But all that aside: The negotiations all in all are moving very slowly, even with all the pushing of YOUNGO.

It has been frustrating to see all our pushing having nearly no influence on the negotiators.

Sitting in a meeting and you hearing some words of a typical blocking state, e.g. like the US or Canada, you get a little bit (or more) angry.

It makes me think: “In 20 years, no one will care about what you are saying now. We are the first generation really affected by Climate Change and you are staying here and negotiating, not keeping in mind, that you are doing this for your children, for us!”

Anton Jeakel is a German member of the YOUNGO group of the UNFCCC.

For more round-up from the Bonn Climate Talks:

RTCC’s round-up of the talks;

UNFCCC Chief Christiana Figueres defends the progress of the talks;