Today Amanda Bradley from development NGO Pact uses the example of the Oddar Meanchey province in Cambodia to explain the role communities play in climate mitigation.

“When trees are lost it makes the earth warmer and there are more disasters like big storms, so that creates problems for everyone”, explains Din Heng, the elected Community Forestry leader for the remote Dung Beng village in Cambodia.

More than 10,000 households are members of the CF groups and participate in the REDD project. Approximately 30 percent of the province’s population live below the poverty line, so REDD revenues will be important in improving livelihoods. (Photo by A Bradley)

For years, he and other community members have witnessed firsthand unwelcome changes in the local climate such as increased flooding and drought.

But recently they are beginning to understand the broader connections between forests and climate change, as well as the community’s important role in contributing to mitigation. 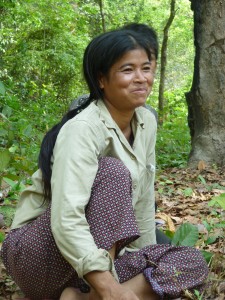 The Oddar Meanchey project aims to ensure that women’s important role in forest use and management is recognized and rewarded. (Photo: A. Bradley)

The REDD+ (Reduced Emissions from Deforestation and Degradation) mechanism recognizes and aims to compensate the role of developing countries in protecting their existing forests. It is on this basis that the Oddar Meanchey Community Forestry REDD project was initiated in 2008.

Since the formal establishment of Oddar Meanchey province in 1999, multiple factors including population increase, resettlement, logging and economic land concessions have contributed to an escalating rate of deforestation and forest degradation within this remote territory.

Over the 30-year span of the project, approximately 8.3 million metric tons of carbon dioxide will be sequestered.

This generates revenues through sales of carbon credits on the voluntary market – revenues which will be used to support forest protection and community development. 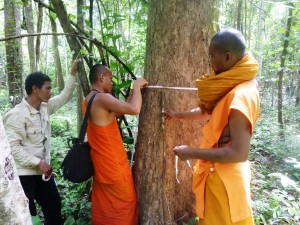 Buddhist monks play a leading role in one of the largest CF areas in the project. Monks participate in all forest management activities including patrols, fire control measures, and biomass assessment. (Photo by A. Bradley)

The project also provides critical biodiversity benefits since the project’s forests are home to a wide range of threatened and endangered flora and fauna species, including banteng, green peafowl, and leopard.

The Oddar Meanchey project is a model of community-based REDD+ whereby communities play a leading role and have secure rights to forest land and carbon benefits.

With recognition of this important role for local communities, the best practice developed in Oddar Meanchey may have broader implications for how REDD+ unfolds across the globe.