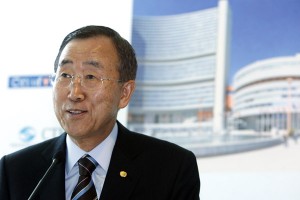 Ban Ki-moon has issued his own set of ideas for Rio+20, a week after criticising the progress of the official negotiating process.

Writing in the New York Times, the UN Secretary General called suggested three sets of issues for negotiators to focus on at the June summit.

“We recognize that we can not continue to burn and consume our way to prosperity,” wrote Ban. “Yet we have not embraced the obvious solution – the only possible solution, now as it was 20 years ago: sustainable development.”

Negotiations over the agenda of the Rio+20 summit ran over time, leading to the arrangement of an emergency round of talks before the event.

“Because so many of today’s challenges are global, they demand a global response – collective power exercised in powerful partnership. Now is not the moment for narrow squabbling. This is a moment for world leaders and their people to unite in common purpose around a shared vision of our common future – the future we want,” he added, echoing the summit’s motto.

“Time is tight. In about four weeks, five days, 14 hours and 50 minutes, we will open the United Nations Conference on Sustainable Development. The truth is: I am disappointed with the negotiations. They are not moving fast enough.”

1. Inspire new thinking: “the old economic model is breaking down” said Ban. He called for businesses to put an emphasis on a “triple bottom line” that includes social environment and economic instead of just profit.

2. Make Rio about people: Ban said he hoped for a summit that “offers concrete hope for real improvements in daily lives”. He also called for a greater voice for women and young people adding that “women should be empowered as engines of economic dynamism and social development”

3. Issue a “waste not” call to action: “Mother Earth has been kind to us. Let humanity reciprocate by respecting her natural boundaries,” said Ban as he called for better protection of our air, water and forests and the improvement of the quality of life in our cities.

Rio+20: What would business do

What makes a good sustainability leader?