Rio+20 Business Focus: How hydropower is helping protect the Ifugao rice terraces in the Philippines

Today Adriana Paez from the Global Sustainable Electricity Partnership explains how a mini-hydro plant helped combat land degredation of the Ifugao rice terraces in the Philippines.

In the municipality of Kiangan, some eight hours by car from the Philippine capital of Manila, the villages or barangays of Ambabag, Pindungan and Mungayang sit quietly on the steep slopes of the Cordillera in the Ifugao province.

These slopes are home to both the villages and the legendary rice terraces, ancient sprawling man-made structures from 2000 years ago that are registered as a UNESCO World Heritage Site.

The Ifugao rice terraces are ancient sprawling man-made structures from 2000 years ago. They are registered as a UNESCO World Heritage Site

One of the Philippine’s poorest regions, Ifugao is dependent on agriculture, particularly the cultivation of rice.

Ifugao farmers continue to use traditional farming practices, not only for cultivating rice in the terraced paddies but also for growing fruit trees and other vegetables.

A source of life, culture and art, the rice terraces have shaped and sustained the lives of local residents for generations and continue to do so today.

Deforestation, modernisation and climate change, however, threaten to destroy these terraces and as a result, in 2001 UNESCO placed the rice terraces on the List of World Heritage in Danger. 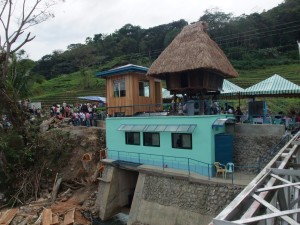 With the idea to provide a pilot model for local sustainable energy-based development and heritage conservation, the Global Sustainable Electricity Partnership proposed to the Philippine government the development of a 200 kW run-of-river hydropower project on the Ambangal river, which runs through a valley between Ambabag and Pindungan.

After several years of pre-feasibility, feasibility and environmental studies, including extensive public consultations, the mini-hydropower plant was successfully inaugurated on January 25, 2010.

Designed and developed by the Partnership under the leadership of the Tokyo Electric Power Company and in collaboration with the Philippine Department of Energy and the Ifugao Provincial Government, this project increases the supply of clean, renewable electricity to the region and, through its power sales, brings much needed funds for the restoration and conservation of the rice terraces.

Mr. Teodoro B. Baguilat Jr., the Ifugao Provicinal Governor at the time of the project’s implementation felt “grateful that such project was brought to Ifugao, creating within the province its own source of green energy”.

For him, “the success of the project lies in the strong local community stakeholder involvement at each phase of development”.

The US$1 million project was entirely funded by the Global Sustainable Electricity Partnership members.

Central to this project was the establishment of the Rice Terrace Conservation Fund that helps finance local terrace conservation activities. Based on the feasibility studies’ financial analyses, the project’s power sales to the local electricity distribution cooperative, IFELCO, will secure around US$70,000 annually for the conservation fund.

Since its inauguration, 10 rice terrace conservation projects have been implemented. 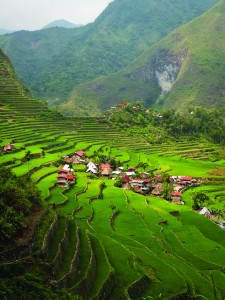 The facility generates around 1,443 MWh of clean energy, 18% of the provinces needs

The Ifugao-Ambangal hydropower facility benefits the residents in several ways. In the short term, 180 local jobs were created raising the level of income in the community, with 6 permanent jobs for the operations of the plant.

The plant generates at its maximum 1,443 MWh of reliable and clean electricity, meeting 18% of the province’s needs, while reducing greenhouse gas emissions by approximately 633,000 kg of CO2 per year.

After a two-year monitoring period, the Partnership, satisfied with the power plant’s operation and maintenance in the foreseeable future, oversaw the transfer of the full ownership of the project assets to the Provincial Government of Ifugao in December 2011.

The protection of a heritage site and new energy development come together in this project in a productive blending of the past and the present, conferring value to a people’s heritage and preserving it for the future.

This project demonstrates that natural resources can be developed in a sustainable manner to provide reliable income and protect the environment and cultural legacy.