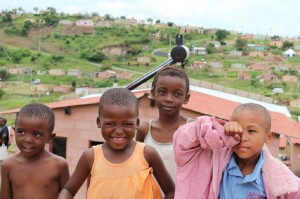 Households were spending as much as 20% of their income on heating water (© Irini Roumboglou/UNFCCC, CDM PoA 4302, SASSA Low Pressure Solar Water Heater Programme)

For houses across South Africa, heating water can be a huge burden.

In some homes as much as 20% of a household’s income could be spent paying for water heating.

In some cases it was a choice between heating water and putting food on the table.

But thanks to the CDM, low income households in South Africa have seen a dramatic improvement.

Since the registration of the first Programme of Activities under the CDM in South Africa in March 2011 more than 80,000 solar water heaters have been installed to low-income homes – cutting down emissions and saving money on a family’s electricity bill.

At the sidelines of the UN climate change conference in Durban, South Africa, a group of 20 journalists went to visit the towns on the outskirts of the city that had benefitted from the project.

In the tenth in the series of UNFCCC CDM Radio Club reports RTCC is hosting, Kensika Monshengwo, a freelance broadcast journalist from the Democratic Republic of Congo visits one of the sites.