Bonn 2012: Marrying science and politics for a sustainable future

Marking the mid-way point between COP17 in Durban and COP18 in Doha next week, the climate talks taking place in Bonn over the next fortnight are a much more low-key affair.

Without the politicians and the media spotlight overhead, these conferences focus on making some headway to where countries believe we should be heading for the end of 2012.

And with the end of this year bringing the end of the Kyoto Protocol’s first commitment period and with ambition over the Durban Platform being a major talking point, it is set once again to be two weeks of hot debate.

Youth groups around the world are again ensuring their voices are heard within the process – by performing a special ceremony outside Bonn’s Martim Hotel, where the conference is taking place, marrying together policy and science. 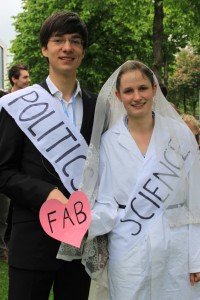 But why is this marriage so important?

The YOUNGO group explain that without combining politics and science, and ensuring policy that is in line with what the scientists are saying, the world is experiencing a gigatonne gap – which sees the carbon emission cuts pledged by countries far off from that needed to retain a 2ºC world.

They felt a marriage ceremony for the two would be a good way of representing this, while adding a little enthusiasm to the proceedings.

“This morning we performed a marriage ceremony between politics and science and gave out leaflets about why we need to marry the two and I think that’s a really good perspective that youth can bring to this, we have the – or we try to have – the knowledge of policy and understanding of the policy briefings but we can also bring a bit more vibrancy and a bit more activism to the proceedings as well,” explained Paul Tobin, UK representative for YOUNGO.

RTCC Video: Paul Tobin talks to RTCC about what the group aim to do while in Bonn and what they hope to achieve:

In a recent presentation from the UN Environment Programme’s chief scientist, Joseph Almaco, made at an informal Ministerial Meeting, the most ambitious targets currently on the table, we could see a gap of around 6 gigatonnes per year – with business-as-usual this could be double.

To meet the 2ºC target – which many believe is still too high – emissions would have to peak in 2020. We are still nowhere near this target.

With a financial crisis to consider and struggles at home in the short term, too few policy makers are thinking ahead to 2020 and beyond to 2050. 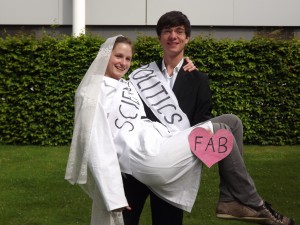 As countries work towards a new set of targets, under both the second commitment period of the Kyoto Protocol and under the Durban Platform, it is these statistics that the youth attending this week’s conference in Bonn want to see acknowledged and supported.

“What we need is solutions to stopping climate change immediately,” said Kyle Gracey from SustainUS. “We need the strongest pledges by the biggest polluters –including the US – to cut their emissions immediately and that is really what we need.

“Where we are in this process and what we would count as some progress, not enough, but some progress are really clear milestones for the next three and a half years on what the parties are going to achieve.”