UNICEF: We must teach urban kids how to deal with disasters 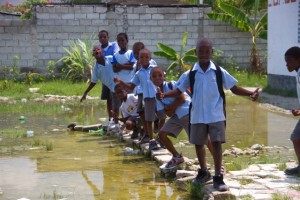 Half of the urban population are children – below the age of 18 – and therefore will be some of the most vulnerable people to climate change and disasters.

It is expected that as many as 175 million children could soon be impacted by disasters every year.

But with the right engagement of children, who make up 50% of city-based populations, Antony Spalton from UNICEF believes they could also be a huge part of the solution.

Speaking to RTCC at the ICLEI Resilient Cities conference 2012 he said: “I think the key issue is that half of the population in urban centres are children and I think typically people tend to think of children as vulnerable victims who live with high levels of disaster risk, but in actual fact children have intrinsic values on risk and have a lot to offer reducing risk in cities.”

With the world expecting to see huge moves of populations towards urban areas – with around 50-60% more people living in cities by 2050 – NGOs and aid agencies working with children will have to find new ways to engage.

“The experience coming out of the last 30 years in aid and development and humanitarian work has been in the rural areas and I do believe we are not as well equipped as we should be in dealing with what are going to be huge huge disasters in urban areas,” he explained.

“We need to revisit some of the methodologies and tools we use on how we reach out to children in urban areas.”

One of the most vital tools for groups such as UNICEF is school safety and information programmes – not only ensuring the schools themselves are safe from disasters but that the classroom is used a place to engage children in risk reduction.

“Hazards such as earthquakes interrupt education. Not only does that have an impact in terms of mortality, for example if a school collapses – and we know that many schools do collapse – but it also means that children drop out of school and out off their educations.

“Education itself can also engage children in taking steps to reduce their risks and to better understand the environment they are working in and come up with simple measures that will make all the difference if there is a flood, when there is early warning or knowing what to do if there is an earthquake, where to crouch in the building so it doesn’t collapse on you.

“Those messages are not only retained by children but they are communicated back to their homes.”

While admitting that there is still some way to go before the perspective of children is considered widely and acted upon, there are some areas where Spalton believe important work has been done.

For example, in Brazil, UNICEF works with the government in Rio to encourage children to work with local government’s to map the risks in communities – for example the risks from flash floods.

And the Children’s Charter on disaster risk reduction that was developed by UNICEF in partnership with PLAN, Save the Children and World Vision, was put together by children for children in a consultation across 21 countries from across the world.

With 600 decision makers, including mayors and UN offices, having signed up to the Charter there are many places – for example in cities in Mozambique, towns in the Philippines and in Brazil – where at local level real action is taking place to listen to what children do have to say.