Rio+20 needs a compass. Will it turn out to be a doughnut?

If Rio+20 is going to put the world on course for sustainable development, it would certainly help if we agreed on where we wanted to go. Writing for RTCC, Oxfam’s Kate Raworth may have the answer…

Here’s one idea, in a recent Oxfam Discussion Paper, that could provide a compass for the journey toward sustainable development in Rio.

A safe and just space for humanity 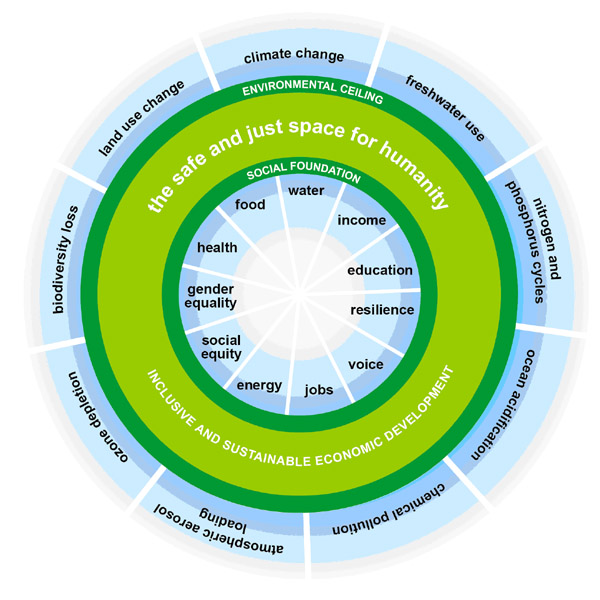 In 2009 the Stockholm Resilience Centre brought together a group of leading Earth-system scientists to come up with the concept of planetary boundaries. They identified a set of nine Earth-system processes – like the freshwater cycle, climate regulation, and the nitrogen cycle – which are critical for keeping the planet in the stable state that has been so beneficial to humanity over the past 10,000 years.

Under too much pressure from human activity, any one of these processes could be pushed into abrupt and even irreversible change. So the scientists drew up a set of boundaries below their danger zones – and they called the area in the middle of the circle ‘a safe operating space for humanity’.

Environmentally safe, yes, but that space could also be deeply socially unjust, leaving millions of people living in poverty.

In their submissions to Rio+20 the world’s governments highlighted 11 social deprivations, so these constitute the social foundation in the image above.

Between the social foundation and the environmental ceiling lies a space – shaped like a doughnut – which is the safe and just space for humanity. Inclusive and sustainable economic development would bring us into this space.

The Earth-system scientists estimate that we have already crossed three planetary boundaries, for climate change, nitrogen use, and biodiversity loss. Meanwhile, much of humanity still lives far below the social foundation: 13% of people are undernourished, for example, shown here by the blue gap beneath the social foundation for food (see image below).

Falling far below the social foundation 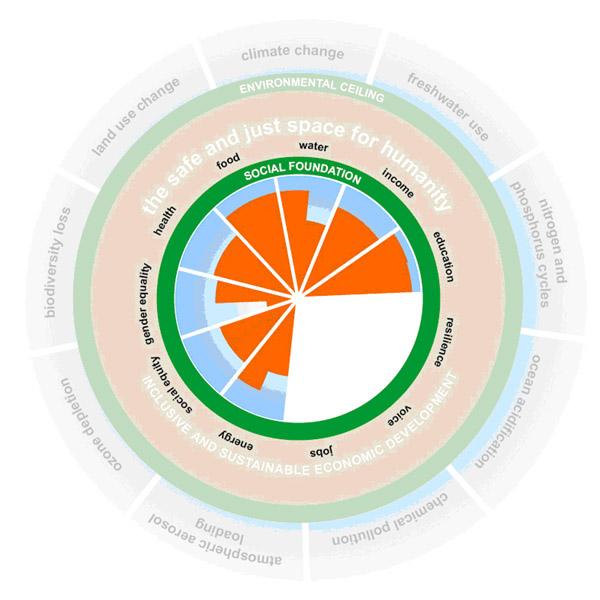 So humanity is still falling below social boundaries, while already exceeding planetary boundaries: it’s a sign of just how deeply unequal and unsustainable our current path of development is.

Indeed, around 50% of global carbon emissions are produced by just 11% of people, and the richest 10% of people hold 57% of global income. Extreme inequality is what’s putting this planet under pressure.

So what would it take to get inside the doughnut and live between planetary and social boundaries? Far greater global equity of resource consumption, and far greater efficiency in using resources to meet human needs.

How that’s achieved is of course the source of intense international debate. But if this doughnut could help bring the ship’s crew together at least to agree on a shared destination, that would be a strong start for the voyage ahead.

Kate Raworth is a Senior Researcher with Oxfam GB.

Check out a short video introducing the idea, and the full discussion paper.