Less than 100 years ago, Koahsiung City in Taiwan was still largely a fishing village.

Now it’s an important industrial city, a hub for international trade, and the leading business and industrial centre for Southern Taiwan.

Four years ago it made the headlines – but not in a way the city’s leaders would have wanted. Koahsiung was rated as the most polluted city on the planet in terms of CO2.

In 2009, the average person in Kaohsiung was consuming around 22 tonnes of CO2 annually – that’s 30% more than the average American that same year and double the national average for Taiwan.

This was due to the large number of steel mills, ship and eletronic manufacturers based within the city boundaries.

The city has also seen itself on the front line of climate change. For example in 2009 Typhoon Morakot brought incredible rainfall to the south of Taiwan – a new record with 2,500 mm in less than 3 days – that brought terrible mudslides to the region.

The country is also witness to costal erosion – 100 metres in the last decade – and ruined harvests due to fluctuating temperatures.

But with 90% of the GDP coming from the electronic industry, going green was never going to be an easy task.

Speaking to RTCC at the ICLEI Resilient Cities 2012 conference, Shyh-Fang Liu deputy mayor of Koahsiung in Taiwan told me about how the city is transforming itself.

“We ask the citizens of Kaohsiung, yes to make money is very important, but how do you make a liveable community?” said Shyh-Fang Liu, Kaohsiung City deputy mayor.

“The heavy industry is heavy pollution too… We want to make a living in the city otherwise we will have to move away. So it is very important that we emphasise on people that we have to do something for the environment.”

RTCC Video: Shyh-Fang Liu, Deputy Mayor of Kaohsiung City spoke to RTCC about the reasons the local government are putting so much emphasis on environmental protection…

To do this, however, Shyh-Fang believes the businesses in the city will have to open up to new types of industries.

“Firstly we want to lower down the heavy industry – the heavy, polluted industry – and if we can bring in more green energy industry or more cultural industries or more tourism and travelling instead of those heavy waste industries. I think it is a good move right now.”

For example the city has begun to open itself up to art, culture and innovation – while still celebrating its traditional industries. The city now runs the Kaohsiung International Container Art Festival and the International Steel & Iron Sculpture festival celebrating creativity while still aiming to remind people of their heritage.

While public art spaces have also popped up across the city – aimed at creating a charming city to be enjoyed by citizens and tourists alike. 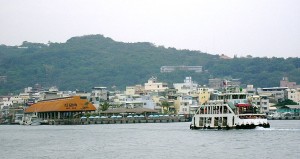 More practical examples of a change in the way the city operates can be found as well.

Along with support for renewable technologies and subsidies for solar power, since 2008 the city has run the Kaohsiung Mass Rapid Transit system. Forty-two kilometres in length and with 34 stations, passengers on the transit hit 70 million in July 2010.

Under the new system, companies are also asked to undergo environmental assessments of their businesses to see where they could save on their emissions. But Shyh-Fang stresses it is important to make the economic case for protecting the environment too.

“If you have pollution, you have to pay, or you have to do something to lower down the pollutant,” says Shyh-Fang. “Secondly it is very important for you to say to them if you can change any kind of technology to bring your industry to some other way to fit the global trends, especially for environmental issues, it will help you to keep your company forever.

“I think so far Taiwan has been very famous for electronics – electronic industries earn about 90% of the GDP in our country.