By Ed King
RTCC in Bonn

Every other morning I catch the tube in London.

If I arrive between 7-7.45 the station is half empty. Fifteen minutes later and it is packed.

By 8am the platforms are usually five deep and the trains – when they arrive – groan with the weight of passengers they are already embracing.

Once or twice a month the gates are closed to allow platforms to clear – such is the tidal wave of humanity wanting to travel to central London.

A similar picture emerges across the world – and it comes down to one word: Flow.

It’s a subject DHL’s Global Programme Director Martin Brown  enjoys talking about. For him cities are all about flow.

Flow of people, cars, freight, air, water and energy. And in our own way we dictate it all.

Martin Brown ICLEI 2 from Responding to Climate Change on Vimeo.

But if we could control the flow, if we could manage it more efficiently, then in theory the streets would be clearer, the trains emptier, energy could cost less and our lives could be better.

Some cities like Nigeria’s capital Abuja are estimated to have grown by 140% in the last decade. Others like Beijing are having to contend with 1000 extra cars per day.

But while cities grow, their infrastructure often struggles to cope – leaving even advanced metropolis’ like London relying on antiquated Victorian sewers and transport systems built for a far smaller population than the one they currently serve.

For some the answer lies in new roads, railways and tunnels. Brown unsurprisingly prefers to view it from a logistical point of view – returning to the concept of managing the flow.

“The logistic service providers are almost like sub-atomic particles who are fizzing away and working frenetically to deliver on a minute-by-minute basis,” he says.

“Where there is a role that has yet to be fully realised, is the ability to harness all this activity and to create – to continue the metaphor – fusion, by coordinating these atoms and getting them facing in the right direction to respond to the city’s challenges today and the context of the city as it transforms.”

DHL’s concept is to coordinate and offer a ‘command and control’ framework through which smaller providers can operate. Brown gives the example of a café he was recently in – that said it had five or six small deliveries per day.

In theory, if you could cut that down to one or two – the retailer could save money, congestion would decrease, as would emissions.

Brown explains that DHL want to take their logistical skills and ‘apply them in a new dynamic marketplace’. Working on similar lines to major supermarkets, they would operate hubs from which smaller low-emission vehicles would operate. 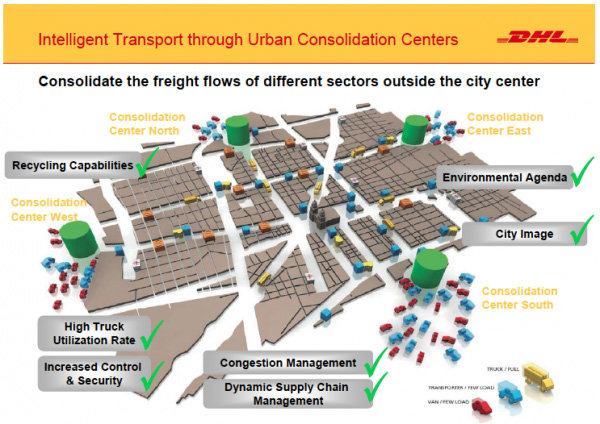 The approach does raise questions.

Would a city want one company to control all of its logistics? Could such a monopoly drive existing smaller suppliers out of business? How could business ensure this ‘command and control’ model was not another extension of ‘big brother’ and excessive top-down regulation?

Brown insists they would seek to work with local service providers – arguing that the target is ‘light goods freight movement’ which often coincides with the busiest times of the day.

Consumers are to an extent dictating these changes. Both Tesco and H&M have told us how their move to clean up their act was in a large part driven by their customers.

Deloitte’s 2012 ‘Connecting the Dots’ report argues that business has to change now in order to maintain market share.

DHL are confident in their ability to deliver. Brown says the usual light freight vehicle is 40-45% full – which could be increased to 90% with more coordination.

Transport and logistics already contribute an estimated 13% of global emissions – a figure that is rising year on year.

DHL’s concept of central freight points will not be popular with many retailers or libertarians – but it does open possibilities.

Peaks of energy use, traffic and other resources have often been taken as part of human nature – elements we have to work around.

Congestion charges (London) and number plate quotas (Mexico City) are well-known measures that have not had a significant impact on freight numbers.

Thinking about when we move and using that capacity more efficiently needs to be explored in more depth. DHL have made a start – others should follow.

Have your say: If you know of an effective scheme that we haven’t mentioned get in touch via @RTCCnewswire or [email protected]