We must close gaps on funding and ambition: UN climate change chief 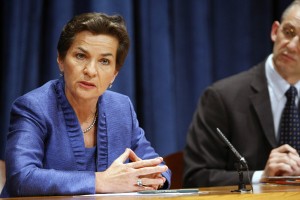 Christiana Figueres says global climate financing must be finalised by the end of 2012. (Source: UN/Paulo Filgueiras)

The head of the UN’s climate change agency has called on negotiators to close two “gaps” in funding and ambition, during 2012.

Speaking as negotiations get underway in Bonn, Christiana Figueres, Executive Secretary, UNFCCC, said it was time to act on the decisions made at the talks in Durban last year or risk leaving vulnerable countries unsupported.

“Durban was a turning point, where governments agreed tasks and timelines that give the best chance of avoiding the worst of future climate change. We now need to maintain the momentum, to constantly keep turning political decisions into action,” said Figueres.

“Progress here is essential because 2012 marks the end of the $30bn of fast-start finance, and no-one wants to see a gap in support. Keeping the construction of the Green Climate Fund (GCF) on schedule this year will be important so that it can become fully operational in 2013.

The GCF will be the vehicle for long-term financing of projects to reduce the impact of, and adapt to, climate change. It is hoped the fund will generate $100bn a by 2020.

While the Parties of the UNFCCC have targeted limiting warming to 2°C, a UNEP report looking at the emissions reduction pledges made so far estimates that we are on course for as much as a 5°C rise in average temperatures. The shortfall in these pledges is referred to as the emissions gap.

“We have all the means at our disposal to close the gap, and the long-term objectives of governments remain attainable. But this depends on stronger emissions reduction efforts, led by industrialized countries, and a sufficient level of ambition to support developing country action,” she said.

The Bonn talks set the framework for two further major meetings of climate negotiators in South Korea and Qatar later this year.

An estimated 194 parties must come to a  consensus on all decisions. Last year they agreed to begin work on a global deal that would commit all nations to legally binding reductions in Greenhouse Gas Emissions.