Mexico is undergoing a major energy transformation that will see a flurry of investment in wind energy during this decade. 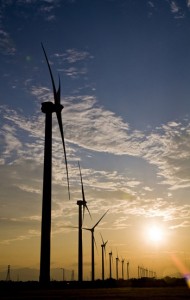 The country’s installed wind capacity will grow from 2GW at the end of 2012 to 12 GW by 2020, according to the AMEE, Mexico’s wind energy association.

The UN ranks Mexico as the 11th largest producer of CO2 emissions globally meaning a shift to a cleaner energy supply can have significant consequences for global levels. It currently sources 88.9% of its energy from fossil fuels.

The majority of the new wind farms are planned for the Isthmus of Tehuantepec, the narrowest strip of land between the Pacific Ocean to the west and the Gulf of Mexico to the east, where the average wind speed is 25 mph.

According to the country’s government, it could potentially supply 139% of its current electricity demand from wind power.

Last month, Mexico introduced radical new climate change laws that include a 50% reduction in CO2 emissions by 2050 and a target to source 35% of its electricity from renewable sources by 2024.