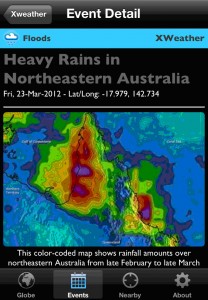 Whisper is quietly – but weather forecasting is all the rage these days.

Whether it is UK scientists heading off into storms to collect vital data in predicting storms and floods, or Prince Charles presenting a bulletin  for the BBC, it is becoming increasingly popular as people experience more unusual events.

And now a new App is getting in on the action – offering users real-time updates on extreme weather events around the world. These include hurricanes, cyclones, flooding as well as volcanic eruptions and dust storms.

The creators of xWeather say they hope to give users the bigger picture when it comes to climate and extreme weather.

“We want to help people see and explore what’s happening in the world that they’re not hearing about,” said Dr. Rich Walker, co-creator of the App.

“The world is increasingly interconnected. The impacts of extreme weather events that cause social, economic and environmental upheavals in one community or country are quickly felt in another, and another.” 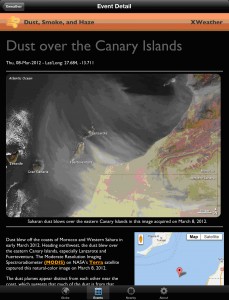 In 2010-2011 extreme weather in Asia impacted the lives of over 42 million people. Floods in Thailand last year alone cost more than $15 billion.

In the US around 80% of the population have been impacted by extreme weather at least once over the past three years.

Around the world more and more people are being impacted by extreme weather and the ability to reliably predict changing conditions can have huge benefits for countries the world over.

For the scientists working in the South West of England this involves conducting research flights directly into the centre of storms.

It comes as the UK is experiencing weeks of intensive rainfall and once again braces itself for flooding and the scientists aim to more accurately track when rain falls and why.

Not just for fun

And for farmers, particularly in the developing world whose crop production is reliant of predictable weather conditions and under threat from climate variability being able to understand and weather is vital. 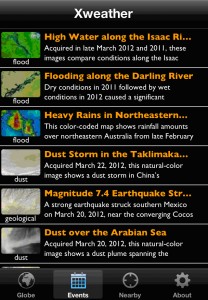 Writing for RTCC, Clyde Fraisse and Norman Breuer from the Inter-American Institute for Global Change Research explained why such forecasts could help farmers they work with in Paraguay to protect their crops.

“Seasonal climate variability is a major cause of production risks faced by farmers,” they said.

“Farmers are very interested in understanding the effects of climate variability on their crop yields,” they added. “They were equally enthusiastic about the possibility of co-developing a decision support system available on the Internet to help them make better decisions about farm management.”

With the latest App from eLoomn users are able to get a bird’s eye perspective on extreme weather across the world, focus on specific regions or on specific events, using NASA satellite images.

They can also search their own neighbourhood to see the direct effects to their lives from extreme weather.