Five reasons why we need Rio+20

As the UN’s Rio+20 conference draws near, it is too easy to be sceptical about its chances of reaching the huge expectations that have been building in the two and a half years since its conception. 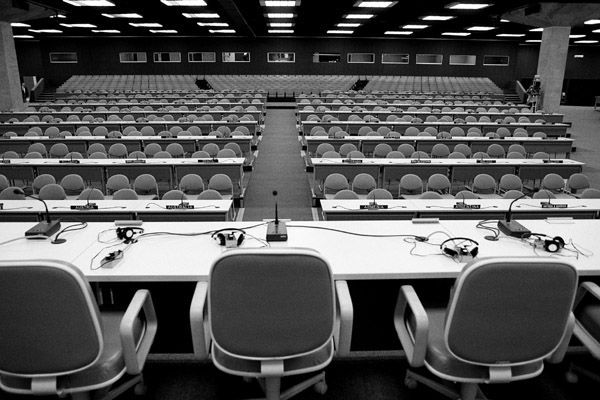 The empty plenary hall at Rio '92 the night before the conference started. (Source: UN/Michos Tsovaras)

Early talk about the UN Summit Rio+20 to be held June 20-22 in Rio de Janeiro, Brazil, gives the impression that it may flop.

Recent articles from respected groups like the Council on Foreign Relations and the World Resources Institute and outlets like Guardian Sustainable Business and Environmental Finance cite low expectations.

For those that pay attention to international governance meetings, the lack of progress at the annual COP meetings (Conference of the Parties) to assess and negotiate climate change commitments and lack of action after past sustainable development meetings have created a cloud of fatigue.

While many are sceptical about Rio+20, we stand to gain from holding this fourth –the fourth in forty years – in a series of Summits focused on environment and development.

1. Because we don’t want to end up with the future we deserve

The Rio+20 Summit tagline “The Future We Want” gives us an opportunity to pause and imagine a better future world. But, it also tacitly acknowledges that our current trajectory does not lead us there.

Some might argue we are on a path towards a future we deserve. After decades of squandering our resources and polluting the environment, we’ve developed habits and lifestyles that do not allow for prosperity for all, nor for future generations.

Rio+20 aims to steer us toward a green economy and an institutional framework for sustainable development, and for that, we must be hopeful. 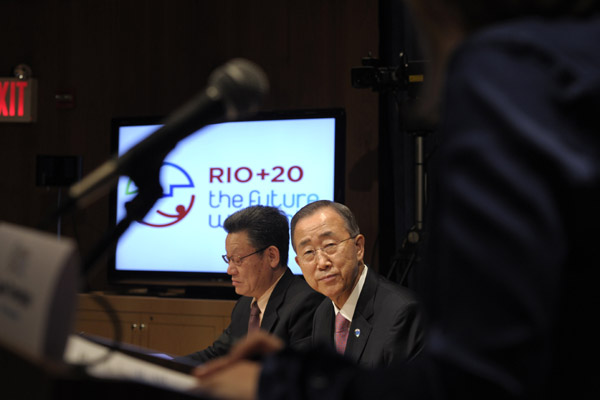 UN Secretary-General Ban Ki-moon has played an active and very public role in the build-up to Rio+20. (Source: UN/Eskinder Debebe)

2. Because not everything’s been accounted for

Why is it so expensive to “go green”? Why is it cheaper to buy products that are not Fairtrade or recyclable or chemical free? Our economic system treats natural resources like freebies and turns a blind eye to those that don’t clean up after themselves.

The Rio+20 outcome document, the “Zero Draft”, is currently being discussed and doctored by national representatives participating in the Summit process. Section 24 of the original Zero Draft called for “a global policy framework requiring all listed and large private companies to consider sustainability issues and to integrate sustainability information within the reporting cycle.”

Unfortunately, the Summit co-chairs have significantly altered the language so that the text merely “recognizes the need” for a global commitment on corporate sustainability reporting.

Business Action for Sustainable Development (BASD), a coalition of leading international business groups who are committed to sustainable development, supports the alteration for reasons specified here.

Corporate sustainability pioneers have been talking about “integrated reporting” for over a decade. Doing so would require work. We would need to create new, achievable, transparent standards for companies. It would necessitate coordination between regulators, policy makers and the private sector.

Modifying the text slows what would have been a necessary, but tough – and critical – slog towards green accounting. But, even in the absence of such progress, finance and environment ministers, CEOs, and sustainability teams have been forced to take a closer look at their own balance sheets. They know what’s coming down the pipeline – eventually.

3. Because we need climate change

A long time ago plant-eating dinosaurs, like the stegosaurus and triceratops, died off because the atmosphere around them changed, and they, in essence, lost their lunch.

They subsisted on pines and cypress trees and when those plants decreased, herbivorous dinosaurs didn’t have enough food. And the rest is history. When you change the environment, those within it have to adapt – or they disappear. (Hat tip to Pavan Sukhdev, Founder-CEO of GIST Advisory, who used this analogy at the FT Road to Rio+20 conference last week.)

We need the kind of climate change that will make businesses adapt, i.e., incentives, taxes, recognition for good behaviour and the end of perverse subsidies.

Rio+20 is catalyzing a wider conversation about how we can create an environment that will prod companies to become more responsible.

If companies won’t change themselves, we need to make it easier for them. Some of the influencers at Rio+20 are aiming to do so.

4. Because it’s time we acknowledged the sum of our parts

But, over time, they also divide us from one another and pit us against each other (e.g., developed vs. developing countries) when it comes to the use of planetary resources.

Rio+20 reminds us that we are all living on the same planet, that we are more than nations and national identity. What would our world look like if we had a global social contract?

The powers that be at Rio+20 are evaluating international environmental governance. Proposals are on the table for creating a World Environmental Organization (WEO), or strengthening the influence of the United Nations Environmental Program (UNEP), a forty-year old program that is suffering from lack of funding, decision-making power and operational capacity.

Might we see the genesis of the creation of a group that takes charge of planetary rights?

5. Because we are ready for take-off

Those that expect the same calibre of results from Rio+20 that we saw in 1992 may be disappointed. But, they shouldn’t be – it’s like comparing apples to potatoes. The two have many similarities but the context has completely changed.

The original Earth Summit was a point of arrival for sustainable development.

It focused on gaining consensus on the need for sustainable development, the creation of processes where there were none, the launch of organizations and conventions that had never been tried before. It was an important evolutionary landmark in the education of civil society, business and local government.

Twenty years later, Rio+20 serves as a point of reflection and departure. Today, we have greater acknowledgement of climate change than ever, agreement on the need to move beyond GDP as a singular measurement of progress and an understanding of the benefits of green energy.

Importantly, we also have the commitment of some – perhaps not enough, but some – key business leaders. Paul Polman, chief executive of Unilever, who is expected to attend the Summit, said in an FT article last week, “World leaders must attend the summit. The world expects nothing less. Our leaders’ presence and commitment is crucial if Rio is to deliver real change.”

Many speculate that the real outcomes of Rio+20 will emerge slowly over the next several years as leaders aim to create a new set of sustainable development goals that will merge or complement the MDGs and apply to all of humanity.

Change takes time. Often it is frustratingly slow. But, we are not starting from zero. We are ready to take off.

Lindsay Clinton is a manager with the SustainAbility think tank and consultancy.

If you’d like to learn more about Rio+20 and past Earth Summits as well as SustainAbility and GlobeScan’s initiative to advance private sector involvement in sustainable development, visit The Regeneration Project website.