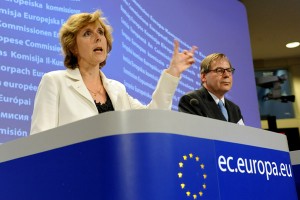 India and the EU negotiators appear on a collision course as preparations begin for the UN talks in Bonn next week.

EU commissioner for climate action Connie Hedegaard said “countries had recognised that the old division between developed and developing countries” had become outdated.

Under the UN’s Kyoto Protocol for cutting carbon emissions, wealthy nations (termed Annex I) are separated from those with less developed economies.

Only Annex I signatories to Kyoto make binding promises to cut their emissions.

However, at the last round of talks in Durban, it was decided to start work on a new set of international ground rules for emissions cuts that would include commitments from all.

India’s Minister for the Environment and Forestry, Jayanthi Natarajan made an impassioned plea on the last day of the talks for any future deal to include the principle of “equity” to ensure developing countries are not left with an unfair burden.

An article in the Times of India said the country’s climate negotiators are concerned ahead of the Bonn conference, that treating developed and developing nations the same would jeopardise existing promises from the EU and others to spread funding and technology to tackle climate change.

The two day meeting in Bonn at the headquarters of the UN’s climate change agency is the first major meeting since the Durban negotiations.

The Durban Platform, the end result of the talks, did not include a reference to equity or “common but differentiated responsibilities and respective capabilities”, previously a cornerstone of the UNFCCC process.

Follow the RTCC.org team in Bonn next week for the latest news on the talks