Ban Ki-moon has called for negotiators to pull out all the stops before the Rio+20 begins, to ensure the summit is not wasted.

The UN Secretary-General’s comments came after it was revealed negotiators had requested an extra five days to decide on the summit’s draft agenda document, which forms the basis of the high-level talks between ministers and leaders at Rio+20.

“We must be determined to confront the hard issues now instead of kicking the can to Rio. Quite simply, we need a negotiated outcome document before Rio to ensure the high-level participation that we have worked so hard to generate,” he added referring to the lack of participation at a ministerial level if there is no document for them to discuss.

“I am encouraged that there is consensus on a process forward. I trust this new process will unleash ambition, creativity, and the flexibility necessary to get the job done. After all, we cannot continue the same approach and expect different results,” he added.

Ban also set out some objectives for the conference, including the start of a process to develop Sustainable Development Goals and the creation of a new development index to replace the purely economic Gross Domestic Product (GDP). 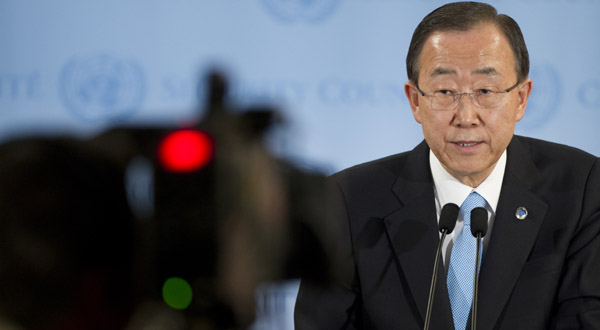 Ban Ki-moon called for negotiators to pick up the pace to ensure a draft document is in place to negotiate on by the time Rio+20 starts. (Source: UN/Mark Garten)