The Weddell Sea region of the Western Antarctic ice sheet could be on the brink of change, according to new research.

The smooth, steep bed beneath the ice sheet could leave it unstable and vulnerable to the warm ocean waters expected to reach far beneath the region’s Filchner-Ronne Ice Shelf, according to two studies published today. 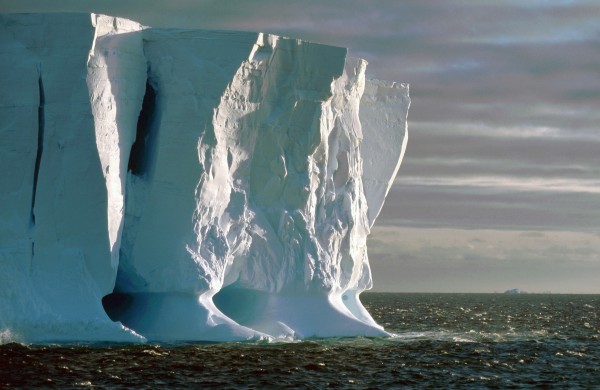 Formation of giant icebergs is a process typical of ice shelves in Antarctica. A new study indicates that an abrupt increase of basal melting may cause a substantial thinning and calving of the Filchner-Ronne Ice Shelf in the Weddell Sea during the 21st century. (© Ralph Timmermann, Alfred Wegener Institute)

The studies, published in Nature and Nature Geoscience, make the Weddell Sea sector of the West Antarctic ice sheet – previously regarded as stable – a region of concern.

Projected changes in warm ocean currents in the region by the end of the 21st century, presented in one of the studies, could erode the buttressing Filchner-Ronne Ice Shelf and may lead to rapid melt this century. 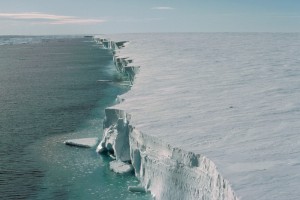 Using a combination of climate and ocean models, the researchers examined the response of the region’s currents to variations in atmosphere over the next two centuries.

They found that from 2036 onwards, pulses of warm water could reach up into the Filchner-Ronne Ice Shelf, and by 2070 onwards these warm currents could reach far enough south to drain into the cavity beneath the ice shelf, reaching the grounding line – the line where grounded ice meets floating ice – a decade later.

The study predicts that by the 2090s ocean temperatures below the ice shelf could be 2°C warmer than at present – and could accelerate the ice melt of the Filchner-Ronne Ice Shelf from beneath.

Meanwhile the surface and shape of the sea bed beneath the two ice streams feeding into the shelf, as seen in the other study, would be unlikely to delay the retreat of the grounding line.

In this study researchers examined the two ice streams – the Institute and the Möller – which feed into the Filchner-Ronne Ice Shelf. 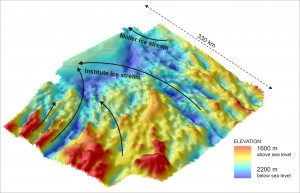 The 3D image of the ice sheets - the arrows represent movements of ice streams within the sheet. (IISMIS)

The study mapped the ice covered landscape of the Weddell Sea region using radar and uncovered a deep reverse sloop, sub-glacial basin close to the edge of the ice sheet.

Around 100 by 200 km in size – the same size as Wales in the UK – and well below sea level, and nearly 2 km deep in places, the basin means the ice sheet above could be more unstable than previously thought and could quickly undergo ice loss.

The researchers’ findings also show the bed beneath the Filchner-Ronne Ice Shelf is fairly smooth, with little in the way of ‘pinning points’ that could help to delay retreat of the ice sheet.

While the Amundsen Sea sector of the Antarctic has previously given scientists most cause for concern, the combination of results published in these latest studies show that the Weddell Sea region could also change soon and that future assessment of the West Antarctic ice sheet can not ignore this area.