PODCAST: Realising the potential for the CDM in Africa 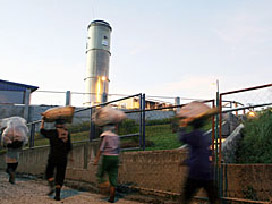 There is huge potential for the Clean Development Mechanism in Africa.

Yet much of this potential is still not being realised – with recent figures from the UN Environment Programme showing that while only around 240 registered projects exist in Africa, there are over 3500 in China.

For many businesses looking to invest in the carbon markets – one of the biggest growing commodity markets worldwide – Africa was seen as a more risky option.

For project developers in the continent, however, years of capacity building has removed many of these risks and they say projects on the ground in Africa are really taking off – not only saving carbon emissions but bringing profits and jobs to local communities and businesses.

In the tenth in the series of UNFCCC CDM Radio Club reports RTCC is hosting, the UNFCCC’s Irini Roumboglou talks to a project developer about a waste-to-energy project in Cote d’Ivoire.

Using anaerobic digesters, the project – the first registered under the CDM in West Africa – will collect and treat 200,000 tonnes of urban waste annually.