In the run-up to the UN’s Rio+20 conference on Sustainable Development RTCC will be examining some of the highlights from the original Earth Summit in 1992.

If you remove carbon dioxide from the equation, then President George HW Bush’s bold claim at a press conference in Rio in 1992 might hold some sway.

He said the country was “the world’s pre-eminent leader in protecting the global environment, had been for many years, we will remain so”.

Bush Senior pushed through some rather meaty air pollution legislation in 1990.

His time in office also included some significant forestry projects overseas, including 40% of all the world’s “debt for nature” schemes, where the US and other countries cancelled portions of national debts in return for investment in local environmental protection – particularly forestry.

Environmentalists at the time were uneasy about the President’s highly economic outlook on the environment. He summarised his philosophy in Rio.

It is thought that as the creation of the UN’s climate change body, the UNFCCC, was being negotiated, Bush was the loudest voice in the room calling for mandatory emissions cuts to be replaced with voluntary measures and only signed once this revision was made.

Similar calls have emanated from the Whitehouse throughout the 18 years of the UNFCCC’s negotiations, regardless of the tenant.

Bush Senior cited scientific uncertainty and economic risk to the US. This was the same call his son would make when renouncing the Kyoto Protocol in 2001, two months after being sworn in.

With much of the science settled, climate change should now fall into the environmental-economic-development union that Bush talked about two decades ago.

Many would not bet against history repeating itself. 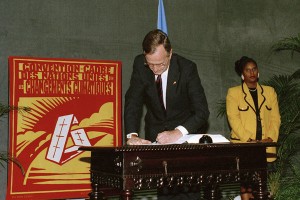 President Collor, Mr. Secretary-General, heads of delegation, may I first express my admiration to Secretary-General Boutros-Ghali and my gratitude to Secretary General Maurice Strong for his tireless work in bringing this Earth summit together. This is truly an historic gathering.

The Chinese have a proverb: If a man cheats the Earth, the Earth will cheat man. The idea of sustaining the planet so that it may sustain us is as old as life itself. We must leave this Earth in better condition than we found it.

Today this old truth must be applied to new threats facing the resources which sustain us all, the atmosphere and the ocean, the stratosphere and the biosphere. Our village is truly global. Some find the challenges ahead overwhelming. I believe that their pessimism is unfounded.

Twenty years ago, at the Stockholm conference, a chief concern of our predecessors was the horrible threat of nuclear war, the ultimate pollutant. No more. Upon my return from Rio, I will meet with Russian President Yeltsin in Washington, and the subject we will discuss is cooperation, not confrontation. Twenty years ago, some spoke of the limits to growth. Today we realize that growth is the engine of change and the friend of the environment.

Today, an unprecedented era of peace, freedom, and stability makes concerted action on the environment possible as never before. This summit is but one key step in the process of international cooperation on environment and development. The United States will work to carry forward the promise of Rio because as important as the road to Rio has been, what matters more is the road from Rio.

There are those who say that cooperation between developed and developing countries is impossible. Well, let them come to Latin America, where debt-for-nature swaps are protecting forests in Costa Rica and funding pollution control in Chile.

There are those who say that it takes state control to protect the environment. Well, let them go to Eastern Europe, where the poisoned bodies of children now pay for the sins of fallen dictators, and only the new breeze of freedom is allowing for cleanup.

There are those who say that change can never come because the interests of the status quo are too powerful. Well, let them come right here to Brazil, where President Collor is forging a new approach that recognizes the economic value of sustaining the rainforest.

There are those who say that economic growth and environmental protection cannot be compatible. Well, let them come to the United States, where, in the 20 years since Stockholm, our economy has grown by 57%, and yet we have cut the lead going into the air by 97%, the carbon monoxide by 41%, the particulates by 59%. We’ve cleaned up our water and preserved our parks, wilderness, and wildlife.

There are those who say that the leaders of the world do not care about the Earth and the environment. Well, let them all come here to Rio.

Mr. President, we have come to Rio. We’ve not only seen the concern, we share it. We not only care, we’re taking action. We come to Rio with an action plan on climate change. It stresses energy efficiency, cleaner air, reforestation, new technology. I am happy to report that I have just signed the Framework Convention on Climate Change.

Today, I invite my colleagues from the industrialized world to join in a prompt start on the convention’s implementation. I propose that our countries meet by January 1st to lay out our national plans for meeting the specific commitments in the Framework Convention. Let us join in translating the words spoken here into concrete action to protect the planet.

We come to Rio with a proposal to double global forest assistance. We stand ready to work together, respecting national sovereignty, on new strategies for forests for the future. As a downpayment, we will double U.S. forest bilateral assistance next year. And we will reform at home, phasing out clear-cutting as a standard practice on U.S. national forests and working to plant one billion trees a year.

We come to Rio with an extensive program of technology cooperation. We stand ready, Government and private sector, to help spread green technology and launch a new generation of clean growth.

We come to Rio recognizing that the developing countries must play a role in protecting the global environment but will need assistance in pursuing these cleaner growths. So we stand ready to increase U.S. international environmental aid by 66% above the 1990 levels, on top of the more than $2.5 billion that we provide through the world’s development banks for Agenda 21 projects.

We come to Rio with more scientific knowledge about the environment than ever before and with the wisdom that there is much, much we do that’s not yet known. And we stand ready to share our science and to lead the world in a program of continued research.

We come to Rio prepared to continue America’s unparalleled efforts to preserve species and habitat. And let me be clear. Our efforts to protect biodiversity itself will exceed, will exceed, the requirements of the treaty. But that proposed agreement threatens to retard biotechnology and undermine the protection of ideas. Unlike the climate agreement, its financing scheme will not work. And it is never easy, it is never easy to stand alone on principle, but sometimes leadership requires that you do. And now is such a time.

Let’s face it, there has been some criticism of the United States. But I must tell you, we come to Rio proud of what we have accomplished and committed to extending the record on American leadership on the environment. In the United States, we have the world’s tightest air quality standards on cars and factories, the most advanced laws for protecting lands and waters, and the most open processes for public participation.

Now for a simple truth: America’s record on environmental protection is second to none. So I did not come here to apologize. We come to press on with deliberate purpose and forceful action. Such action will demonstrate our continuing commitment to leadership and to international cooperation on the environment.

It’s been said that we don’t inherit the Earth from our ancestors, we borrow it from our children. When our children look back on this time and this place, they will be grateful that we met at Rio, and they will certainly be pleased with the intentions stated and the commitments made. But they will judge us by the actions we take from this day forward. Let us not disappoint them.

Mr. President, once again, my congratulations to you, sir. Mr. Secretary-General, our sincere thanks. And thank you all very, very much.