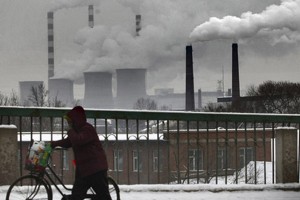 Many hope China will join an Asia wide trading scheme in the future. (Source: Flickr/theseoduke)

South Korea has become the latest in a succession of country’s to establish a carbon trading platform.

Parliament passed the necessary laws several months later than planned with 148 of its 151 members voting for and three abstaining.

Trading schemes create carbon certificates that can be bought and sold to allow companies to pay for additional emissions over and above their allowance, or to cash in on shortfalls created by better efficiency.

“The announcement is very encouraging news for a carbon industry which is currently bumping along the floor,” said Gareth Phillips, chairman of the Project Developers Forum, a group representing companies that coordinate carbon-cutting projects overseas.

Carbon prices, the value of one ton of Co2 emissions, have recently sunk to record lows, decreasing the incentive for businesses to take part in the schemes.

“It is very good news that the Koreans have, after a long and protracted debate, decided to move forward with an emissions trading scheme,” Phillips told RTCC.

“One more scheme to add to Australia’s Carbon Price and New Zealand’s trading scheme greatly increases the likelihood of a regional or Asia-Pacific scheme. It’s a vote of confidence for the industry.”