Connecting the dots on climate change

Tomorrow, vulnerable populations from the UK to Nepal to Australia will be joined together to “connect the dots” between climate change, and its impacts such as extreme weather.

Organised by 350.org ‘Climate Impacts Day’ will bring together thousands of people across the globe, in more than one thousand events in over 100 countries – telling the story of a planet already feeling the effects of climate change.

The group says they got the idea for the event after witnessing the string of extreme events.

In the last decade the world has seen heatwaves strike Europe (2003), Pakistan’s devastating flooding hitting 20 million people (2010) and Russia’s warmest summer on record bringing with it extreme drought and forest fires.  Last year alone saw 12 weather disasters in the US, extreme flooding in South East Asia and a drought which devastated the Horn of Africa.

And this all comes at a time when glaciers are shrinking, Arctic sea ice is in decline and sea levels are continuing to rise.

“We just celebrated Earth Day. May 5 is more like Broken Earth Day, a worldwide witness to the destruction global warming is already causing,” said Bill McKibben the founder of 350.org. “People everywhere are saying the same thing: our tragedy is not some isolated trauma, it’s part of a pattern.”

The group calls on people to join in with the weekend’s events and collect images to help “continue to wage the political fight to cut carbon emissions” and get the mass media to connect the dots themselves.

In the Seychelles, Sustainability for Seychelles will be organising a moonlight mutia – a traditional dance, often used for social protest – at Mare Anglaise beach to lament the loss of the beach and the onset of sea level rise. 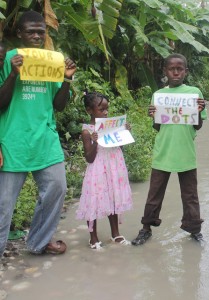 They will also celebrate the commitment of people to reducing their carbon footprints.

If you’re in Melbourne tomorrow why not join activists to roll a dotted Earth around the city, stopping off at companies involved in “Extreme Energy” – for example tar sands and coal. The group aims to raise awareness for solution for reducing demand on fossil fuels.

In Daegu a series of events will culminate in a letter writing campaign. Beginning in the centre of town participants will hold a variety of umbrellas of different colours and styles for the day’s photo opportunity to raise awareness of the increased rain in South Korea – which has impacted on farming and caused rice prices to double.

The group will then march through the busiest streets in Daegu singing and playing music, aiming to generate as much attention as possible before finished in a café to write letters urging action on climate change to the government. The group will also produce a map, where participants can post their own personal experiences of climate change both at home and abroad.

Participants in La Paz aim to draw attention to the speed at which the Tuni-Condoriri Glaciers are melting as a result of climate change – threatening water supplies in the highlands and the cities of La Paz and El Alto.

The group will climb to the base of the glaciers on Tuni-Condoriri and create a climate dot on the glaciers themselves.

New Yorkers will be joined in Battery Park in Lower Manhattan with a 30 foot blue parachute with the words “NYC Underwater” across it and open it up across Battery Park with the Manhattan Skyline behind them. 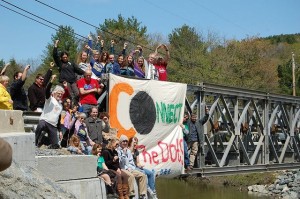 Vermonters at the site of a covered bridge that was washed away during Hurricane Irene (© 350.org)

They aim to raise awareness of the vulnerability of Lower Manhattan to sea-level rise – with the region expected to be completely submerged by rising seas.

In London, the London Occupy movement will be hosting a game of Twister outside St Paul’s Cathedral where participants will use their bodies to connect the dots between extreme weather events and climate change.

The Fun Day will also include picnics, photo exhibitions a large dot photo opp, a climate impacts tour and speakers to explore climate impacts, its causes, causalities and collective action.

Find your nearest event at the Climate Dots webpage.