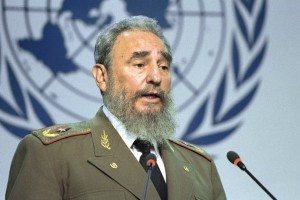 Fidel Castro delivers his speech to the Earth Summit in 1992. (Source: UN/Michos Tzovaras)

In the run up to the UN’s Rio+20 conference on Sustainable Development, RTCC will be examining some of the highlights from the original Earth Summit in 1992.

Today we look at the contribution of Cuba’s then leader, Fidel Castro.

Castro was one among more than 100 world leaders that attended the meeting that set the path for the next two decades of environmental debate and contributed heavily to thinking on global development thereafter.

Castro’s speech was typically radical warning of the “progressive elimination” of humanity’s habitat.

Spotting an opportunity to lay the blame with his capitalist foes, Castro had a field day.

“It must be said that consumer societies are chiefly responsible for this appalling environmental destruction,” he told delegates.

“They were spawned by the former colonial metropolis. They are the offspring of imperial policies which, in turn, brought forth the backwardness and poverty that have become the scourge for the great majority of humankind.”

Away from the politics, he picked up on a few key themes: “Population pressures and poverty lead to desperate efforts to survive, even at the expense of nature.”

He may have ceded power to his brother Raul, but Comrade Fidel clearly continues to monitor environmental issues.

In a not entirely coherent letter published by Cuban state media last month, he points the finger of blame at Canada, via Washington DC of course.

“I knew about the damage caused by the Yankees to the people of Canada,” he wrote. “They forced the country to look for oil by extracting it from huge extensions of sand that are impregnated with that fluid, thus causing an irreparable damage to the environment of that beautiful and extensive country.

“The incredible damage was the one caused to millions of persons by the Canadian companies specialized in the mining of gold, precious metals and radioactive material.”

Once again, the environmental message may be sincere, but the politics are never far from the surface.

A more positive call to action can be found in the conclusion to Castro’s 1992 speech:

“Enough of selfishness. Enough of schemes of domination. Enough of insensitivity, irresponsibility and deceit. Tomorrow will be too late to do what we should have done a long time ago.”

Make your own  mind up and read Fidel Castro’s speech in full from the Earth Summit, Rio, 1992:

“An important biological species — humankind — is at risk of disappearing due to the rapid and progressive elimination of its natural habitat. We are becoming aware of this problem when it is almost too late to prevent it. It must be said that consumer societies are chiefly responsible for this appalling environmental destruction.

They were spawned by the former colonial metropolis. They are the offspring of imperial policies which, in turn, brought forth the backwardness and poverty that have become the scourge for the great majority of humankind.

With only 20% of the world’s population, they consume two-thirds of all metals and three-fourths of the energy produced worldwide. They have poisoned the seas and the rivers. They have polluted the air. They have weakened and perforated the ozone layer. They have saturated the atmosphere with gases, altering climatic conditions with the catastrophic effects we are already beginning to suffer. 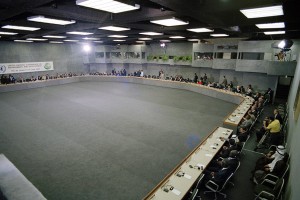 Inside the negotiating hall at the Rio Earth Summit in 1992. (Source: UN/Michos Tzovaras)

The forests are disappearing. The deserts are expanding. Billions of tons of fertile soil are washed every year into the sea. Numerous species are becoming extinct. Population pressures and poverty lead to desperate efforts to survive, even at the expense of nature. Third World countries, yesterday’s colonies and today nations exploited and plundered by an unjust international economic order, cannot be blamed for all this.

The solution cannot be to prevent the development of those who need it the most. Because today, everything that contributes to underdevelopment and poverty is a flagrant rape of the environment.

As a result, tens of millions of men, women and children die every year in the Third World, more than in each of the two world wars.

Unequal trade, protectionism and the foreign debt assault the ecological balance and promote the destruction of the environment. If we want to save humanity from this self-destruction, wealth and available technologies must be distributed better throughout the planet. Less luxury and less waste in a few countries would mean less poverty and hunger in much of the world.

Now that the supposed threat of communism has disappeared and there is no more pretext to wage cold wars or continue the arms race and military spending, what then is preventing these resources from going immediately to promote Third World development and fight the ecological destruction threatening the planet?

Enough of selfishness. Enough of schemes of domination. Enough of insensitivity, irresponsibility and deceit. Tomorrow will be too late to do what we should have done a long time ago.”