Warm ocean water attacking the Antarctic ice shelves from below is a dominant cause of recent ice loss in Antarctica, according to a new study from NASA.

The research, published in the journal Nature, used a satellite laser to measure the thinning occurring on ice shelves – the floating tongues of ice that jut out from the land.

It shows that ice loss in the Antarctic can not only be attributed by the warming air melting ice from above but also warmer currents thawing ice shelves from below.

VIDEO: Animation from NASA/Goddard CGI Lab showing the circulation of ocean currents around the western Antarctic ice shelves. The shelves are indicated by the rainbow color; red is thicker (greater than 550 meters), while blue is thinner (less than 200 meters).

This process is weakening the ice shelves, according to the researchers, allowing more and more inland ice to flow down to the coast and feed into thinning ice shelves and draining more ice into the sea and contributing to sea-level rise.

This ocean driven thinning is responsible for the most widespread and rapid ice losses in West Antarctica and the majority of the Antarctic ice sheet loss during the study period.

The researchers believe it brings them a step closer to providing a reliable projection of future sea level rise.

“We can lose an awful lot of ice to the sea without ever having summers warm enough to make the snow on top of the glaciers melt,” said the study’s lead author Hamish Pritchard of the British Antarctic Survey in Cambridge, United Kingdom. “The oceans can do all the work from below.”

The research also linked the increased melting on the underside of the glacier and glacier acceleration with changes in wind patterns.

“Studies have shown Antarctic winds have changed because of changes in climate,” Pritchard said. “This has affected the strength and direction of ocean currents. As a result warm water is funnelled beneath the floating ice. These studies and our new results suggest Antarctica’s glaciers are responding rapidly to a changing climate.

A different picture, however, is seen on the Antarctic Peninsula – the long stretch of land pointing towards South America. 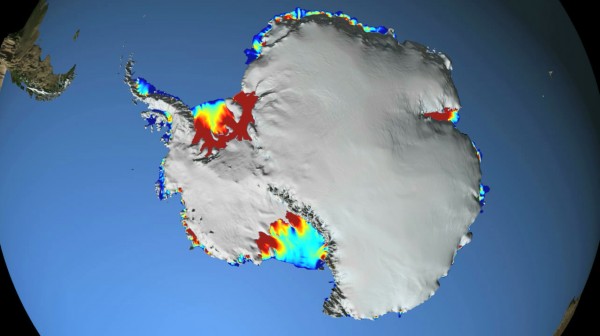 To map the changing thickness of all the floating ice shelves around Antarctica the team used NASA’s Ice, Cloud and land Elevation Satellite (ICESat) taking a time series of 4.5 million surface height measurements using a laser mounted on the satellite.

It measured how the ice shelf height changed over time against computer models discarding any changes from natural snow accumulation and compaction. It also used a tide model to eliminate height changes caused by tides rising and lowering.

While previous studies have used satellite data to measure ice shelves, laser measurement can give more precise changes of thickness.

The study was carried out by an international team from the British Antarctic Survey, Utrecht University in Utrecht, Netherlands, the University of California in San Diego and the non-profit research institute Earth and Space Research in Corvallis, Oregon, US.