As the Brazilian Chamber of Deputies approves controversial legislation on forests, campaigners call on the country’s President Dilma Rousseff to veto the law.

The new legislation would ease rules on the amount of forest farmers must keep on their land and has been seen as a victory for the country’s powerful agricultural lobby.

As the bill now goes before President Dilma, campaigners are calling on her to veto the new rules saying the changes to the law would cast a “dark shadow” over Brazil ahead of the Rio+20 Earth Summit to be held in the country this June.

“The government’s vote on the changes to the Forest Code has cast a dark shadow across Brazil’s reputation as a global leader in the fight against deforestation and climate change,” said Paulo Adario, Greenpeace Brazil’s Amazon Campaign Director.

“This new law puts at risk the progress Brazil has demonstrated over the last years by growing economically, increasing exports and decreasing forest loss.”

He added: “Brazil has taken a decisive step backwards. The approval of the changes is a defeat for the Amazon and for President Dilma. This new law flies in the face of Dilma’s promise to oppose granting amnesty for past forest crimes and to prevent more forest loss.

Though the bill will require millions of hectares of already cleared land to be replanted, environmental groups say it will drastically ease rule on farmers – who are responsible for much of the deforestation of the Amazon and other sensitive areas in recent decades – on how much forest they must conserve.

It would also provide amnesty from fines for illegally clearing trees prior to July 2008.

Campaign groups say the political process has been “hijacked” by the rural sector, although the farming lobby say it will promote sustainable food production.

Framers in Brazil have pushed for changes to the code for some time saying the environmental laws have pushed smaller farmers off their land and uncertainty over legislation has undermined investment in the sector – which accounts for around 5% of Brazil’s GDP.

However, some have warned that the weakening of the code could cause Brazil to miss its emissions targets. 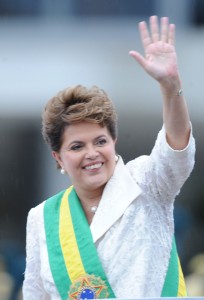 Deforestation in Brazil has slowed in recent years because of greater law enforcement and the use of satellite imagery to track deforestation.

Under the Forest Code – which was implemented back in 1965 – a certain percentage of land, between 20% and 80% depending on the region, must be conserved by landowners and farmers.

While this provision will remain, critics of the changes say changes to the code will erode key environmental protections, for example allowing landowners to count woodland on river margins, hilltops and steep inclines towards a total proportion of forest that must be preserved on their land.

At present, such land isn’t allowed in their calculation.

President Dilma could still use her veto to remove some clauses of the legislation – but it is expected this would spark an ongoing battle in Congress who could knock down her veto with enough support.

As Brazil prepares itself for the Rio+20 Summit this June all eyes will now be on President Dilma.