Every year, cities in China, Korea and Japan fear the arrival of the “Yellow Dragons”.

While this may sound like a myth or legend, these “Yellow Dragons” are real. Forming in China’s third largest province, Inner Mongolia, they arrive in cities as dust storms, depositing millions of tonnes of sand across Beijing and onwards over the water to Korea and Japan.

In recent years their effects have even been witnessed as far a field as the Western coast of the USA.

Inner Mongolia is battling from severe desertification. Over grazing, logging and expanding populations and farms, as well as drought has turned once fertile grasslands into sandy plains.

When the winds come in March and April they kick up intense clouds of tiny sand and soil particles, carrying them eastwards. 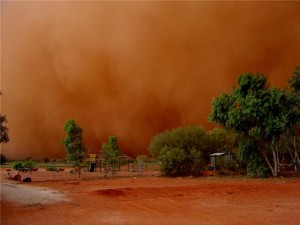 Over a quarter of China is now officially classified as desert – with up to 400 million people under threat from the fast expansion in the country’s western and north-western regions. It is estimated that the economic loss could be around $6.5 billion annually.

With effects felt as far away as South Korea and Japan, desert expansion in China has shot up the agenda in all countries affected.

In South Korea, organisations and businesses are both working hard to create partnerships in the region to combat desertification.

“The aim of the project is to develop environmental co-operation to benefit both sides.

“Desertification is one of the most serious issues in China and the country needs to work to stop it. Meanwhile for Korea the project is an opportunity to realise the connectedness of our related environmental issues.”

Formed in 2001, Future Forest’s biggest project to date began in 2006 and aimed to plant one billion trees along the border of the Kubuchi Desert and create a wind break to “tame the yellow dragon”. 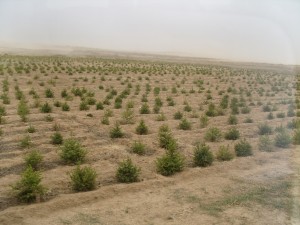 Sing-gil explains how to date the “Great Green Wall” is 16 km long and 2.8 km wide. Consisting of 5.2 million trees, the projects used local species of tree which would be most likely to survive in the harsh conditions in one of the world’s coldest deserts.

“We did some research and spoke to experts and they decided to plant trees which were local and could survive in very severe conditions,” he says. “They have to be able to withstand -30°C temperatures in winter and up to the very top temperatures of around 40°C in the summer.

“One thing you have to notice is that this desert wasn’t a desert 500 years ago because of better land use. This means there is the possibility of restoring the land.”

Currently the project has seen 70% survival rate of the plants.

Another project in the region choose to grow grasses rather than trees, which they felt were more suited to the environment in Inner Mongolia.

The project targets dried lakes in the region, aimed at tackling salinity and soil erosion.

“The area where we work specifically doing restoration was originally a salty lake,” explains BoYoung Sim from EcoPeace Asia, the organisation behind the project. “As this dried up, the Alkali particles of the lake get mixed up with the Yellow Dust and flies to the East worsening the Yellow Dust storms in Korea. That’s why we work in the region.” 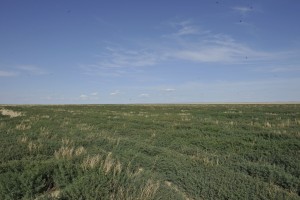 The project has to date planted 3000 hectares of Suaeda Grass in the dried up  Qagannor Lake which they say not only helps to prevent dust but also helps to lower the temperature and pH of the soil – creating more optimal conditions for growth.

Having been working in the area since 2003 BoYoung explains how the project has seen some great success in the region. The group’s project in the Qagannor region aims to minimise human intervention and preserve the areas for natural restoration.

However, he admits that such a different project has encountered some difficulties in China. 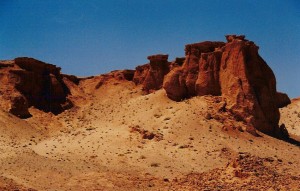 However, both projects have seen some great successes. Both projects have volunteers at their centre and have seen great commitment in Korea and China. BoYoung says it has given people the motivation and encouragement to contribute to anti-desertification.

And for local communities in Inner Mongolia, there have also been benefits witnessed from the growing projects.

“Some of the residents who lived on the edge of the desert were about to abandon their houses and fields as they became engulfed by desertification,” says Sung-gil. “While many left, some have been able to come back to their homes because the project has meant the ecosystems have been revived.”