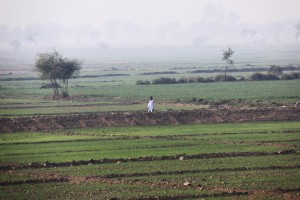 Without fair access to land, peasant and farm workers in Pakistan have no reason to protect land from desertification (© DfID/Flickr)

Land is a critical productive asset and the majority of livelihoods in the drylands of the developing world depend on it.

The UN Convention to Combat Desertification (UNCCD) is one of the main environmental treaties, borne out of the Rio Earth Summit, and it addresses land; its resources, its productivity and the role of stakeholders in combating desertification.

Those poor people, who use land to meet their daily livelihood needs – farmers, tenants, agricultural workers and pastoral communities – are the primary stakeholders for desertification.

They are the ones whose decisions and practices affect the health of top soil, in either positive or negative ways.

In many of the world’s least developed and underdeveloped countries, access to land and land governance systems do not provide the proper entitlements or access to land for poor tenants and pastoralists.

This is one of the main reasons why these communities are not encouraged to take care of the land on which they depend.

While climatic changes and prolonged droughts are putting increasing pressure on the productivity of soil, the government’s lack of interest in agriculture and natural resource management worsens the problem.

This absence of title of land for the landless tillers and the denial of legitimate access to rangelands for pastoralists, are adding to the increase in desertification, as people do not own the land titles they do not care about the land.

Pakistan’s example is most pertinent. Land ownership in Pakistan is highly concentrated: 75% of agricultural land is owned by just 25% of the people – while the rest of the agri-land is owned by the 75% small famers.

Land owners in Pakistan are mostly absentee land lords, while the work is done by peasants and share croppers who get their income as part of the harvest’s proceeds. 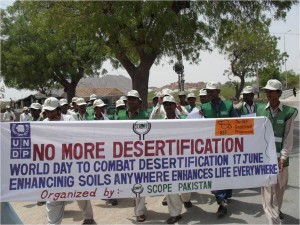 These peasants have been demanding land for a long time, and there has so far been three attempts to take excess land from large land owners to re-distribute it to the landless farmers – but without political influence they were unable to regain much land and the impacts of land reforms were minimal.

Land degradation in the form of water logging, salinity on canal irrigated lands and soil erosion on rain-fed land can be observed in Pakistan.

Around 50% of the farm land in Pakistan is subjected to desertification. The impact of land degradation on large farms – owned by absentee land lords in for example the Sindh Province – can be observed more prominently than that is small farms in say the Punjab province, where average land holdings are relatively small (less than 25 acres).

With no access to titles, pastoralists have no incentive to manage rangeland, which are mostly owned and managed by the Forest Department.

Here you can see large scale deforestation and uncontrolled exploitation of natural fauna and flora, resulting in desertification.

There are, however, some examples across the country where communities have somehow maintained their local control on a small scale and where the rangelands are still very healthy.

In the absence of inclusive land governance and pro-poor land access policies, UNCCD objectives can be hard to accomplish.

Co-operation among stakeholders cannot achieve its objectives until the primary stakeholders – tenants, peasants, pastoralists and small land holders – are taken on board and empowered by creating an enabling environment.

Continuous absence of tenure rights, long overdue and reforms and pro-poor land access policies are the main hurdles in creating this environment for grassroots actors in which they can play a role in protecting productive soil and land resources.

The UNCCD recognizes this principle in Article 3 (a), which states:

“The Parties should ensure that decisions on the design and implementation of programmes to combat desertification and/or mitigate the effects of drought are taken with the participation of populations and local communities and that an enabling environment is created at higher levels to facilitate action at national and local levels.”

And Article 5 (e), which demands its parties to:

“Provide an enabling environment by strengthening, as appropriate, relevant existing legislation and, where they do not exist, enacting new laws and establishing long-term policies and action programmes.”

Participation of grassroots land users is absolutely essential, and can only be made possible when they are accommodated in the national level decision making and policy development process. 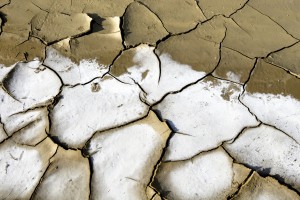 Meaningful, effective and equitable land reforms are urgently needed in many developing countries, which are facing a desertification crisis – to address land, poverty and food security in a holistic way.

Debates in and around the UNCCD are lacking this vital link.

Although we often listen the rhetoric about the importance of participation of stakeholders, particularly affected populations in decisions fighting against desertification, it is time that this issue be raised at the UNCCD and at a national level.

It is time we ensure real participation of farmers, tenants, pastoralists and landless agriculture laborers who are at the frontline in the fight against desertification.

Tanveer Arif, is CEO at Society for Conservation and Protection of Environment (SCOPE), an active NGO following UNCCD, since 1993.

For more from Desertification week: