Over-consumption must be tackled to ensure sustainable development 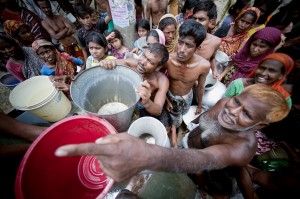 The report warns that over-consumption of resources has left many more communities even more vulnerable to climate change, disasters and economic shocks (© UN Photo/Kibae Park)

Tackling over-consumption, not over-population will be key to ensuring sustainable development, according to a new report from Christian Aid.

The paper warns that poor people – often the main source of population growth – should not be blamed for the global environmental crisis in the face of overconsumption of the world’s middle classes.

The group says more sustainable pathways are possible, and all the technologies needed are available but now it is up to policy makers and business to step up ahead of the Rio+20 Summit and align policies with what is achievable.

Currently, around 20% of the world’s population account for around 80% of consumption of global resources, and the world is consuming 50% more than is environmentally sustainable.

With increasing ‘natural resource grabs’ as Christian Aid terms it – from the wealthy countries, richer people and private sector businesses – lack of food, water and energy are leaving the world’s poorest communities more vulnerable to climate change, natural disasters and the economic downturn.

“Sometimes the implication seems to be that it is high birth rates in developing countries, rather than overconsumption by rich people, which is the main cause of climate change and other global environment crises,” said Dr Alison Doig, Christian Aid’s Senior Advisor on Sustainable Development and author of the report “Inequality in a Constrained World”.

“This would be a dangerous misconception, because it diverts attention from where it is desperately needed, which is reining in the runaway consumption of the world’s wealthy and middle classes and transforming their economics to make them sustainable and fair.”

And with poor people aspiring to a high-consumption lifestyle, Christian Aid warns the world can not sustain the level of demand placed on natural resources.

But Christian Aid believes an alternative model to development can be achieved. The report found that all technologies and economic mechanisms exist to technically deliver a more sustainable world.

It calls for the political-will of decision makers to align itself with these existing mechanisms and allow progress to be made. The report said immediate action should be taken to:

– Move beyond GDP as a measure of economic development to include social and natural wellbeing.

To ensure this equitable and sustainable future, however, the report argues other key actors will also play a significant role:

– Global agreements and agencies will need to be aligned to achieve a common goal and implement more ambitious agreements on climate change, biodiversity and development.

– Inclusive governance is needed at all levels, engaging communities in decision making and sharing rights over natural resources.

Without such a change, Christian Aid warns, the global economy will continue to drive the environmental crisis and push the world’s poorest into ever more precarious locations.

“They [wealthy countries] are taking control of fresh water, forests, fish, minerals and fossil fuels, all of which they treat as commodities,” it says. “This is having devastating impacts on poor people and the planet.”