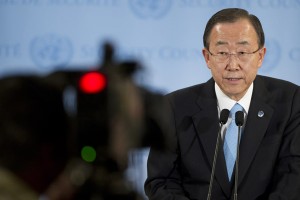 UN Secretary-General Ban Ki-moon has called for this summer’s Rio+20 summit to create a sustainable development index to replace GDP as the main measure of a country’s advancement.

Addressing a group of mayors and local government officials at the UN in New York, Ban called for “an outcome from Rio+20 that is thus both practical and transformational”.

“We need to move beyond gross domestic product as our main measure of progress, and fashion a sustainable development index that puts people first,” said Ban.

The agenda of the conference is still being thrashed out, however a broad scope of issues will be covered including sustainable energy and the green economy.

“Energy, water, food, biodiversity, climate change adaptation, exposure to natural hazards, consumption and production patterns, social protection floors and jobs, especially for young people – these are all closely linked. Our challenge is to connect the dots, so that advances on one can generate progress on others.”

The original draft outcome document has ballooned from 19 pages to 278 pages following two rounds of discussions.

The draft, once complete, will form the basis of the talks in Rio.