New research has found the polar bear to be much older than originally thought, showing it adapted much less rapidly to harsh conditions of the Arctic. Researchers say this questions its ability to adapt to current climate change.

The study, published in Science, found that polar bears may have evolved from their brown bear ancestors as far back as 600,000 years ago, making them five times older than previously recognised.

And if the endangered Arctic species had much more time to adapt to its harsh conditions it could be harder for them to adapt now to the rapid changes brought about by climate change, warn the researchers from German Biodiversity and Climate Research Centre (BiK-F). 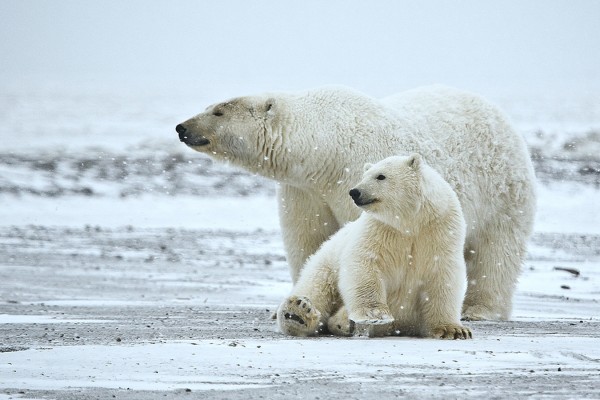 Previous studies of the polar bear had considered it an example of surprisingly rapid adaptation of a mammal to colder climates.

Whether polar bears will be able to survive current sea ice melting is still not clear.

With human impacts accelerating the rate of climate change, the Arctic could reach higher temperatures than previous interglacial warm phases.

In addition to this, the scientists believe other human-related issues are threatening the bear today – including Arctic residents killing the bears and increased pollution.

“If we were to lose the polar bears in our era, we would have to ask ourselves what role we played in pushing them over the edge,” said Frank Hailer, lead author of the study.

The latest findings on the polar bears evolutionary history are a result of analysis of information from the nuclear genome of polar and brown bears.

Despite being different in terms of body size, skin and coat colour, fur type, tooth structure and behaviour, previous research had indicated that polar and brown bears have only diverged recently in evolutionary terms – based on studies of the mitochondrial linage (a small part of the DNA passed from mothers to offspring).

By studying a lot more of the DNA from inside the cell nucleus, the latest study found very different results.

“Instead of the traditional approach of looking at mitochondrial DNA we studied many pieces of the nuclear DNA that are each independently inherited,” explains Hailer. “We characterised those pieces, or genetic markers, in multiple polar and brown bear individuals.”

Conducting research on polar bears is very difficult. The bear spends most of its life on the sea ice, and also typically dies there where its remains sink to the sea floor.

Fossil remains of the bears are therefore scarce – so researchers must study the history of the species by looking at the genes of today’s polar bears.