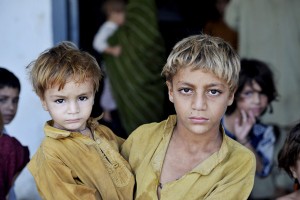 Children have a key role to play in climate change adaptation and disaster relief work, according to a new study.

As one of the groups of society most severely affected by disasters and the consequences of climate change, the report calls for children to be placed front and centre in both policy making and in community projects on the ground.

The paper by the Institute of Development Studies stresses however that this work must be done under the right conditions.

“We have to start putting children at the heart of disaster risk reduction and climate change adaptation work,” Tom Tanner, IDS Research Fellow and co-author of the report.

“Programmes need to recognise that children are especially vulnerable to disasters and need protection. But more than that, children themselves have a critical role to play in tackling extreme events and climate change. They have the right to participate in decision-making, as citizens and active agents of change,” said Tanner.

The paper reviews two case studies in the Philippines and El Salvador.

In the Philippines a youth group took part in a mangrove re-planting exercise in conjunction with an NGO. The children combined knowledge gained at school with additional skills learned from the project. The mangroves improved biodiversity, provided storm protection, boosted fishing and sequestered carbon dioxide.

“Our research has shown the variety of ways that children can be involved – whether through designing and implementing projects, analysing risk, or mobilising others to take action,” said Tanner.

“At a local level, these include facilitating youth groups, identifying community champions and creating safe spaces to build trust.”

Projects such as those detailed in the IDS paper are in sharp contrast to climate change attitudes in parts of the developed world.

Recent legislation in the US seeks to protect teachers that choose to teach climate change denial and creationism in schools.

RTCC Climate Change Children’s Musical: All the materials required to put on your own performance are available to download here free of charge.