Photo of the week #14 – Penguins under threat from melting ice 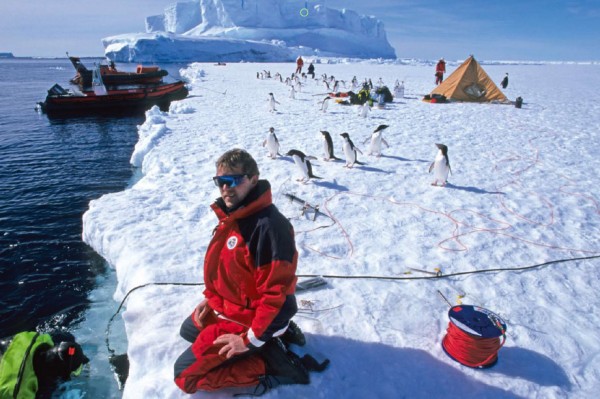 Climate modelling has suggested penguin numbers could fall in the decades ahead if warming around the Antarctic erodes the sea ice on which animals nest.

Krill – the tiny crustaceans that penguins feed on – are also high dependent on the ice feeding on algae found on it – penguins could also be hit by restricted food sources.

However, latest research using high-resolution images from satellites has offered some good news as researchers found that total numbers of one of six penguin species found in the Antarctic, the emperor penguin numbers could be at 595,000 – double previous estimates.

In this photo scientists from the Norwegian Antarctic Research Expedition, measure the intensity of light under the ice edge of Trolltunga, located off Queen Maud Land in Antarctica.

They aim to gain a greater understanding of both man-made and natural climate change – and have attracted the attention of one of the regions smaller penguin species.