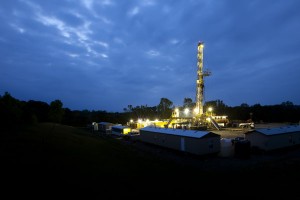 A drilling rig in Fayetteville in the US where a shale gas boom is under way. (Source: BHP Biliton)

The controversial fracking method of gas extraction has been cleared in a new report commissioned by the UK Department of Energy and Climate Change (DECC).

Early work on well in Lancashire, northern England, were put on hold after the activity triggered small magnitude earthquakes.

The new study conducted by three independent experts has recommended a preliminary test phase ahead of drills being made fully operational.

Those opposed to the technique say the concern is not limited to the direct damage of the quakes.

“Even within the narrow context of earthquakes, this report misses all the real issues such as sub-surface damage to wells causing them to leak,” said Elsie Walker, an activist with the Frack Off campaign group.

Walker also raised concern over “the much larger earthquakes seen in the US as a result of wide spread shale gas development and the potential effects on sensitive infrastructure like nuclear power stations and railway lines”.

There are also fears about pollution from the water used in the process as well as the availability of cheap gas resources slowing the momentum for the development of renewable energy. Environmental groups say this could jeopardise CO2 emission targets.

Cuadrilla, the company involved in the Lancashire drilling, is awaiting a decision from DECC within the next two months as to whether it can resume operations.

It is now expected to get the green light, however DECC has opened a public consultation period on the subject.

In the US, where fracking is widely used for extracting shale gas, earthquakes above magnitude 3 on the Richter scale have quadrupled since 2008.

Shale gas represented 23% of US gas production in 2010. The country is predicted to be a net exporter of natural gas by 2021.

Other countries with shale resources, including France, Poland, China and the UK, are now looking to reproduce the success the US has enjoyed.