With Northern Pakistan being home to 5,218 glaciers and 2420 glacial lakes – 52 of which have been classified as potentially dangerous – the two year pilot project is the first of its kind in the country to help the vulnerable better understand and respond to glacial lake outburst floods (GLOFs).

Speaking at the event launch, Jawed Ali Khan, Director General of Environment and Climate Change at Pakistan’s Ministry of Environment said GLOF is like a “mountain tsunami in the making”.

GLOFs take place when dams containing a glacial lake – a lake which has formed as a glacier has receded – fails.

Failure of such a lake can happen for several reasons including erosion, a build up of water pressure, an avalanche of rock or snow, an earthquake, volcanic eruptions under the ice or if large portions of a glacier break off and displaces the lake.

Studies of glacier lakes, in both Pakistan and other countries – particularly Nepal – have found many of the glacier lakes growing at an alarming rate and often unstable.

The $4.1 million project in Pakistan, managed by Ministry of National Disaster Management in collaboration with the United Nations Development Programme, will focus on two sites: Bagrot Valley in Gilgit-Baltistan and Drongagh Valley Chitral in the Khyber Pakhtunkhwa province of the country. 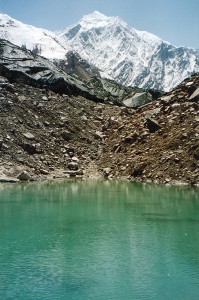 The sites are part of the Hindu Kush Himalayan (HKH) region – which is the largest area in the world covered by glaciers and has around 15,000 glaciers across eight countries from Afghanistan to Myanmar and includes both Pakistan and Nepal.

A recent study examining 3D satellite images of glaciers in the Karakoram range – on the border of India, China and Pakistan – found they have actually gained mass.

The project members, however, said glaciers in Pakistan are receding at a rate on average of almost 40 to 60 metres per decade and post a threat to the region and the 1.3 billion people who live in the basins of the nine river systems covered by the HKH glaciers.

Dr. Qamar-uz-Zaman Chaudhry, Advisor on Climate Affairs stressed that global warming trends and challenges including avalanches, landslides and GLOF threats are greater in Pakistan than the global average.

“Climate change poses risks as well as opportunities to a region like Pakistan, rich in biodiversity,” he said. “Pakistan is the lowest emitter of greenhouse gases but the worst sufferer, which justifies the urgent need to implement the GLOF project.”